The Bold and the Beautiful Spoilers: Does Katie Lose Custody of Will For Being An Accessory To Conspiracy?

BY hellodrdavis on November 10, 2018 | Comments: 2 comments
Related : Soap Opera, Spoiler, Television, The Bold and the Beautiful 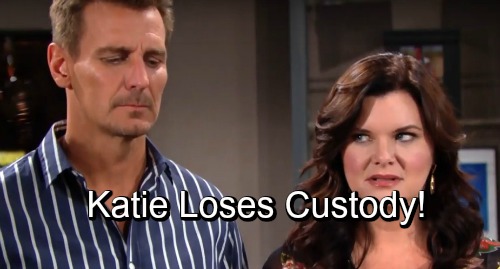 The Bold and the Beautiful spoilers tease that those who know about Ridge’s (Thorsten Kaye) judge tampering will soon be in a state of shock and panic. Brooke (Katherine Kelly Lang), Katie (Heather Tom), and Thorne (Ingo Rademacher) are all privy to how Ridge pressured Judge McMullen (Joe Lando) to find in Katie’s favor.

Once Bill gets verification of the conspiracy, he’ll have Ridge and the judge right where he wants them…running scared. Ridge will quickly put two and two together and figure out that Bill listened to his conversation with Judge McMullen. Ridge will be deeply worried about Bill’s next move, and a bit panicked.

B&B spoilers say that he’ll sit down Brooke, Katie, and Thorne, and let them know that Bill’s onto him. This will terrify Katie in particular, who won’t know if Bill knows that she knew about the rigged custody ruling. Katie will panic, since she could be in a world of legal trouble for knowing about the conspiracy but not coming forward.

Katie knows that Bill’s a sharp guy, and that he can probably guess that she knew about the rigged outcome at some point, especially since she eventually ended up giving Bill more access to Will (Finnegan George) than the custody ruling stipulated.

Of course, Katie being in legal trouble for knowing about a conspiracy would be a bad thing. But what she’ll be even more worried about is the possibility of losing custody of Will. She’ll probably envision a situation in which the case is re-tried and Bill sues her for full custody of Will.

Katie’s going to be in a tizzy worrying about all the terrible possibilities that could come from this situation. Do you think there’s a chance she’ll actually lose Will? Stay tuned to the CBS soap and don’t forget to check CDL often for the latest Bold and the Beautiful spoilers, updates, and news.