BY Marcy Cohen on May 31, 2018 | Comments: 3 comments
Related : Soap Opera, Spoiler, Television, The Bold and the Beautiful 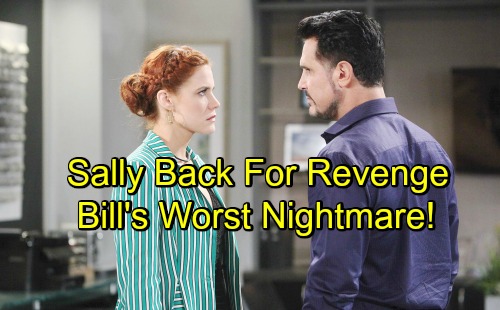 The Bold and the Beautiful (B&B) spoilers tease that a storm’s brewing on the CBS soap. Hurricane Sally (Courtney Hope) is set to hit Los Angeles by mid-June. Sally’s always been a bit of a firecracker, but she could become a full-blown explosion this time around. B&B fans are about to see a darker side of Sally Spectra!

Thomas (Pierson Fode) came back to reunite with Sally after Caroline’s (Linsey Godfrey) lies were exposed. However, Thomas obviously has a fickle heart. Perhaps he swept Sally off her feet too soon. Thomas probably should’ve taken some time to process Caroline’s actions and decide if he could forgive her. Instead, he rushed back into things with Sally and that could bring more heartache.

Maybe Thomas will soften toward Caroline and decide he wants to be with her after all. He probably got used to being a family with Douglas (Leighton and Jackson Rapo). Tension could erupt when Sally learns Thomas still has deep feelings for his ex. A crushing breakup could spark her return to LA. Why? To make the true source of her problems pay the price!

The Bold and the Beautiful viewers know Bill (Don Diamont) targeted Sally as soon as she showed up. He was determined to build his precious skyscraper, so that led to several schemes against Spectra. Plus, Bill deceived Thomas about Caroline’s bogus illness and talked her into playing along. That brought plenty of pain for poor Sally.

In other words, Bill was the reason for nearly every problem Sally encountered. Her previous B&B run was all about getting knocked down time and time again. That’s why Sally’s about to take charge of her own destiny. She’ll determine that nobody’s going to stand in her way, especially not ruthless Bill Spencer. Let’s hope Sally’s fired up enough to truly take Bill down.

Soap Opera Digest recently interviewed Courtney Hope about Sally’s return. She offered some great hints about B&B’s plans for the character. “When Sally comes back, she is a very different Sally,” Hope promised. “She’s a bit hardened. I’d like to say it’s from all the hoops that she’s been jumping through, and all of the ditches that she finds herself in constantly.”

Hope added that she’s anxious to see what fans think of the new Sally. It won’t be long until viewers can deliver their verdict! The Bold and the Beautiful spoilers say an exciting story’s looming, so we’ll give you updates as other B&B news comes in. Stay tuned to the CBS soap and don’t forget to check CDL often for the latest Bold and the Beautiful spoilers, updates, and news.