The Bold and the Beautiful Spoilers: Is Bill the Victim – Are Thorne and Ridge Being Fair?

BY Sean O'Brien on August 25, 2018 | Comments: one comment
Related : Soap Opera, Spoiler, Television, The Bold and the Beautiful 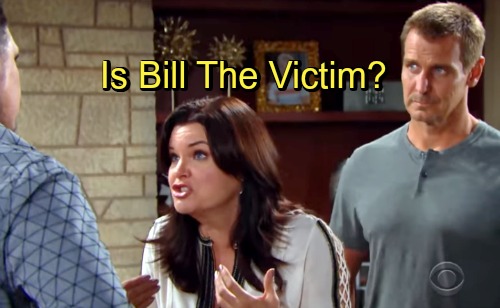 The Bold and the Beautiful spoilers tease that Katie (Heather Tom) will be influenced by Thorne (Ingo Rademacher) and Ridge’s (Thorsten Kaye) selfish interest in her child. They’re encouraging her to seek sole custody of Will (Finnegan George), which is actually their way of also attacking Bill (Don Diamont).

Some may disagree, but Bill has not been an awful father to his youngest son. Even Brooke (Katherine Kelly Lang), who recently divorced Diamont’s demonized character, told Ridge as much. Kaye’s alter ego wasn’t interested in listening, nor is his smitten brother willing to give Bill the benefit of any doubt.

Oh, it’s fully understandable that the Forrester brothers would be fearful of Bill’s role in Will’s life and his negative influence on Katie. But guys, Bill is Will’s dad. You two are not.

Katie’s instincts were right, Bill had a breakthrough in recent weeks. The truly deep conversation he shared with Katie included tears from both parties that weren’t faked on either end. Bill fully recognized and acknowledged that he needed to bond with Will and is preparing to do so.

Yes, Bill is a bit rusty. He needs to relearn how to bond with his SORAS’d son. As viewers recall, Tom’s real life son, Zane Alexander Achor, played Will for a handful of years. Achor was last seen earlier this year. George appears to be approximately three years old than the child actor he replaced.

Katie had talked Will into being open to seeing his dad. Their last meeting didn’t go too well, as Bill still wanted to play earlier adolescent games, while Will was transfixed with technology.

Bad timing has boxed Bill into a meeting with an overseas business consortium that he’s been courting for many years. Justin (Aaron Spears) has long argued that Bill needs to treat his family members better and also shouldn’t be seen as a negative force now. He’s simply told his boss that Spencer Publications can’t afford to spurn this one-day-only meeting opportunity.

Bill relented to Justin’s plea, called Katie and shared the disappointing news. However, he said he would be over tomorrow. The old Bill would have canceled with no rescheduled date in mind.

Katie might eventually come to realize that Thorne and Ridge weren’t actually looking out for her, or Will. Instead, they surely won’t be able to deny that their dealings and awareness of Bill’s history projected a shared bias in the summer of 2018.