The Bold and the Beautiful Spoilers: Jacqueline MacInnes Wood Dishes on Steffy’s Empowering Storyline – Shares What She’d Like to See

BY Heather Hughes on August 2, 2018 | Comments: one comment
Related : Soap Opera, Spoiler, Television, The Bold and the Beautiful 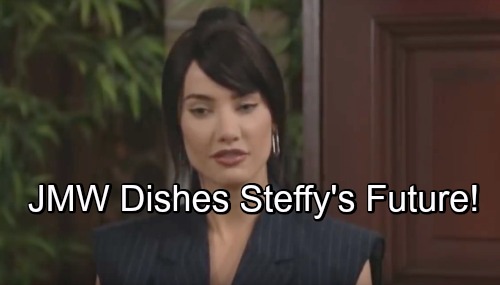 The Bold and the Beautiful (B&B) spoilers tease that Steffy’s (Jacqueline MacInnes Wood) finally found herself again. She’s taking charge of her life and accepting that she doesn’t need a man to go after what she wants. After all the chaos with Liam (Scott Clifton) and Bill (Don Diamont), Steffy’s ready for some freedom. It sounds like she’ll be single for a while, but there’ll still be plenty of drama.

Jacqueline MacInnes Wood recently took over The Bold and the Beautiful’s Twitter account. She offered her thoughts on Steffy’s empowering storyline and dished on what she’d like to see next. For starters, one fan asked Wood how she stayed so beautiful inside and out. She acknowledged the sweet compliment and offered an explanation. It’s all about having the right attitude.

“I think not letting anyone define you is really important,” Wood said. “I define me. i choose my happiness.” Of course, that ties right in with Steffy’s new path. Wood even urged viewers tweeting along to share their own “I choose me” moments. She’s starting a real movement here!

It’s especially nice to see a female soap character standing up for herself. Daytime dramas can make women pushovers a little too often. It’s time to move on from the days of damsels in distress and focus on strong fighters like Steffy. The Bold and the Beautiful spoilers say she’ll definitely be showing her strength in the coming weeks.

Another fan suggested he was excited to see Steffy back at work. Some major Forrester Creations drama’s coming up, so Wood’s excited, too. She also addressed the issue of the Forrester shares. Despite Steffy’s refusal to marry him, Bill gave them to her anyway. Wood called it “smart” on Steffy’s part and added “muahahah.” Was this Steffy’s plan all along? We may never know for sure.

Many Bold and the Beautiful viewers loved Taylor’s (Hunter Tylo) recent comeback. People are anxious to see Steffy and Taylor in more scenes together, so it’s good that Wood’s on board. The actress gushed, “Would LOVE that! shes so great to work with!”

Before this chat concluded, Wood filled fans in on a social media problem. She’s off Twitter right now, but she’s hoping to get her account back up and running soon. Wood revealed, “For those of you that have been asking! I will be getting my twitter back! I think someone hacked it eekkk!”

That hacking is a bummer, but at least Wood’s getting it sorted out. Likewise, The Bold and the Beautiful spoilers say Steffy’s sorting out her life. B&B watchers will be anxious to watch her shine. We’ll give you updates as other news comes in. Stay tuned to the CBS soap and don’t forget to check CDL often for the latest Bold and the Beautiful spoilers, updates, and news.