The Bold and the Beautiful Spoilers: Jacqueline MacInnes Wood NOT Pregnant Despite Misleading Reports and Rumors 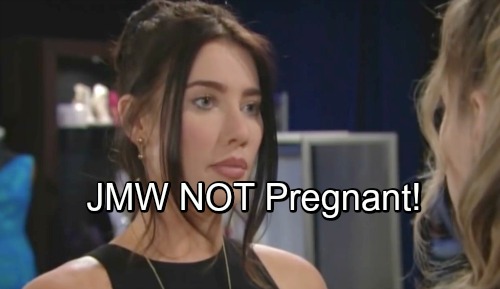 The Bold and the Beautiful spoilers report that despite reports by a few unreliable websites B&B star and classic beauty Jaqueline MacInnes Wood is NOT pregnant. Soap stars are often the subject of rampant rumors, and recently there’s been considerable speculation about the Bold and the Beautiful actress. There has been speculation that Jacqueline MacInnes Wood, who portrays Steffy Forrester on B&B, is currently pregnant with her first child.

The problem is that there is simply no credible evidence to suggest that Wood is indeed pregnant. It’s one thing for fans to wonder aloud if the actress may be with child, but some ‘writers’ have actually put it out there that Wood is likely pregnant. There’s just no basis for reaching that conclusion.

And, actually, there’s ample evidence that points to Wood NOT being pregnant. On B&B, Wood’s character (Steffy) has just started an “Intimates” lingerie line at Forrester Creations, her place of employment. One of the hot features of the line is that Steffy herself will be modeling some of the lingerie. Wood simply wouldn’t be able to do this if she were pregnant.

And there’s been no indication from Wood on her (quite active) Instagram account that she’s pregnant. She frequently shares scenes from her life and her modeling with fans, and there’s been no official announcement from her about a pregnancy. Nor does it seem from the recent pictures she’s posted that there’s any hint of a baby bump.

So, where does this leave us? Could Wood be pregnant? Insofar as any actress within childbearing years could be pregnant, sure. But when it comes down to the evidence, there’s just none to credibly suggest that she is, and there’s plenty of evidence to suggest that she’s not.