The Bold and the Beautiful Spoilers: Hope’s Bubble Bursts, Steffy’s Love for Liam Becomes a Threat – No Happy Ending for ‘Lope’ 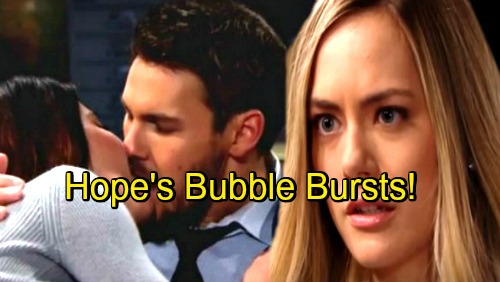 Of course, Steffy will tell herself it’s not a factor. She’ll act like this is strictly about business, but she won’t be fooling B&B viewers. Deep down, Steffy will want to stick it to Hope. She pushed Liam toward his ex, but that doesn’t mean she can resent her.

Steffy certainly won’t want to lose to Hope once again. She gave Liam up, but she’s not willing to sacrifice or scale down her intimates collection. Steffy will have to draw the line there. However, Steffy’s feelings will also affect her on a personal level. She was awfully upset when she saw Hope and Liam embracing at Forrester Creations.

Steffy could end up lashing out at Liam in the midst of this big battle. It’s understandable that he’d support his wife, but Steffy may still feel hurt. Liam will always be the father of Steffy’s child – unless The Bold and the Beautiful offers a paternity twist somewhere down the road!

As of right now, Liam is Kelly’s dad and that means a great deal to Steffy. She won’t like it if she feels like he’s turning against her. Looming fights could lead to plenty of sexual tension. That’s a typical pattern on soaps. There’s a thin line between love and hate, especially when you’re dealing with a love triangle that never really fades out. Hope and Steffy seemed doomed to fight over Liam indefinitely.

Sooner or later, Liam’s going to be pulled back in Steffy’s direction. It may take a while, but you can bet the farm it’ll happen. The Bold and the Beautiful spoilers say we could see a turning point during this FC war. Maybe working through the conflict will make Liam and Steffy’s bond stronger.

Hope believes she’s got the perfect life with Liam, but she’d better enjoy it while it lasts. Steffy will inevitably burst this “Lope” bubble eventually. We’ll give you updates as other B&B news comes in. Stay tuned to the CBS soap and don’t forget to check CDL often for the latest Bold and the Beautiful spoilers, updates and news.