The Bold and the Beautiful Spoilers: Jennifer Gareis Back On Contract at B&B – Donna Logan Returns

BY hellodrdavis on September 20, 2018 | Comments: one comment
Related : Soap Opera, Spoiler, Television, The Bold and the Beautiful 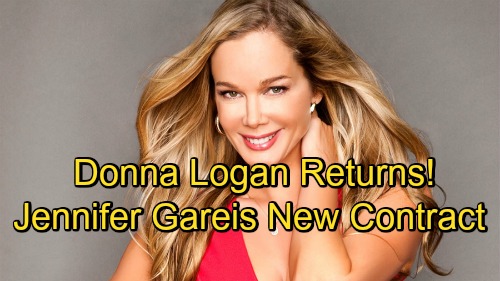 The Bold and the Beautiful spoilers is pleased to report a change in status for one popular actress that will leave many fans delighted. According to CBS Soaps in Depth, Jennifer Gareis is back on contract at B&B. Jennifer, who portrays Donna Logan on the CBS soap, has recently been seen only occasionally for holidays and family functions. But that’s about to change.

Fans can look forward to seeing much more of Jennifer once she begins airing on contract sometime in mid-October. She was last seen during Hope (Annika Noelle) and Liam’s (Scott Clifton) wedding, and she’ll be making another brief appearance for Katie (Heather Tom) and Thorne’s (Ingo Rademacher) upcoming nuptials before beginning her contract period.

Jennifer has a long history in daytime. She portrayed Grace Turner on The Young and the Restless from 1997-2004, and she took over the role of Donna Logan on B&B in 2006. She was on contract at B&B until 2015, at which point she was dropped to recurring status.

Of course, the big question is where Donna will fit into the current storylines. Brooke might need a sympathetic ear if things continue to go south with Ridge (Thorsten Kaye), so Donna could lend a hand there. But she’ll need a juicy story of her own, and fans will just have to wait and see what’s in store for her.

And what about a love interest? Donna will need one of those, and there are a couple glaring possibilities. There’s Justin (Aaron D. Spears), who Donna has a rich history with. And there’s always Bill (Don Diamont), who frequently needs someone new to obsess over. Or maybe Donna will do a “Steffy” (Jacqueline MacInnes Wood), and just stand on her own two feet for a while without a man in her life.

Congratulations to Jennifer Gareis! We look forward to seeing more of Donna on B&B. Stay tuned to the CBS soap and don’t forget to check CDL often for the latest Bold and the Beautiful spoilers, updates, and news.