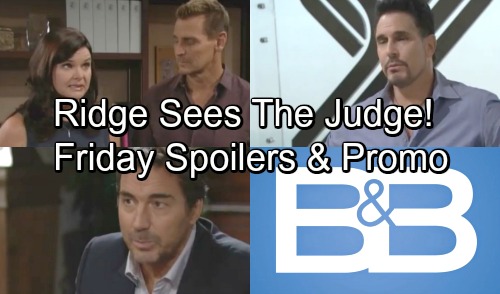 The Bold and the Beautiful (B&B) spoilers for Friday, September 21, tease that Brooke (Katherine Kelly Lang) will worry about her secret partnership. She’s been meeting with Bill (Don Diamont) to discuss strategies and offer support, but it’s awfully risky. Brooke won’t want the word to spread since it could cause major issues in her marriage.

Nevertheless, Brooke will keep trying to make Katie (Heather Tom) see the light. She intends to fight for Bill until the bitter end. Unfortunately, Katie will just get riled and rant about Bill being an occasional father. She’ll declare that Bill sees Will (Finnegan George) on his terms and his terms only.

Katie’s sick of seeing the disappointment in her son’s eyes, so she’s making some changes. She’s been battling doubts throughout this process, but it looks like they’ll start to fade. The Bold and the Beautiful spoilers say Thorne (Ingo Rademacher) will be pleased about that. He’ll come up with a tactic they can use in court and hope that Katie will get on board.

As Katie and Thorne prepare for war, Ridge (Thorsten Kaye) will pressure Judge Craig McMullen (Joe Lando). This judge owes him a huge favor, so Ridge has come to collect. He asked his pal to grant custody of Will to Katie, but Judge McMullen will have reservations.

Ridge is certainly asking a lot from him here. Still, Ridge will push Craig to make this happen. He’ll insist that Will’s only going to benefit from this decision. While Judge McMullen considers Ridge’s suggestion, Bill will contemplate a plan of his own. He intends to raise the stakes and perhaps apply a bit of pressure as well.

Bill will hint that even the best marriages have secrets. Will he seek dirt on Judge McMullen? Could Bill threaten to expose something publicly if the judge doesn’t cooperate? Regardless, some shockers are coming up in this storyline. B&B fans won’t want to miss the explosive scenes ahead.