BY Kinsley Goldman on April 25, 2018 | Comments: one comment
Related : Soap Opera, Spoiler, Television, The Bold and the Beautiful 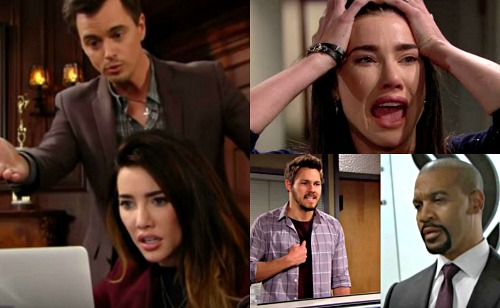 The Bold and the Beautiful (B&B) spoilers tease that Justin (Aaron D. Spears) will get roped into a scheme as usual. When you work for “Dollar Bill” Spencer (Don Diamont), there’s always going to be trouble. Justin will worry that Bill’s heading down the wrong path again, but there’ll be no stopping him. Bill will force Justin to shut up and get with the program.

Naturally, this plot will be all about winning Steffy (Jacqueline MacInnes Wood) over. Bill’s pretty much obsessed with her at this point. He’d do just about anything to tear Steffy and Liam (Scott Clifton) apart. B&B spoilers say Bill will prove that as his next round of ruthlessness kicks off.

Here’s what we know about Bill’s latest scheme. He’ll manipulate Wyatt (Darin Brooks) into giving Liam bogus info and Steffy will eventually be deceived as well. Justin will get caught in the drama somehow, so let’s consider how this might play out.

Bill might lie about Steffy’s love for him, but that’d be easy for her to deny. In fact, Steffy’s already been quite clear about wanting her husband back. It’ll surely raise some red flags for Liam if Wyatt says Steffy wants Bill. Still, The Bold and the Beautiful characters don’t always think logically. Liam isn’t the brightest guy around, so he might be duped by that.

However, there’s a surefire way to obliterate Steffy and Liam’s bond. Bill really needs to take advantage of a better strategy. Perhaps Bill will deliver some shocking orders to his righthand man. Will Bill tell Justin to blackmail Steffy’s obstetrician? Could Justin score some dirt on Dr. Phillips (Robin Givens) and push her to say the paternity results were wrong?

This route would certainly be soapy and it’d actually stand a chance of working. The baby’s the only thing left to draw Liam to Steffy. A fake paternity error would devastate Liam and convince him to turn his back on his wife. Plus, Steffy would be more inclined to open her heart to Bill. If she believes Bill’s the father, she’ll at least want her daughter to have a dad around.