BY Heather Hughes on May 24, 2018 | Comments: 3 comments
Related : Soap Opera, Spoiler, Television, The Bold and the Beautiful 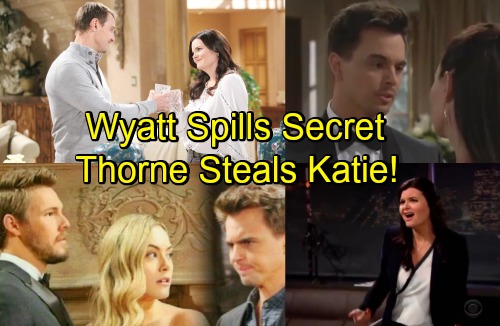 The Bold and the Beautiful (B&B) spoilers tease that Wyatt’s (Darin Brooks) choice will cause a world of trouble. He suddenly became Bill’s (Don Diamont) pride and joy thanks to his silence. Bill was determined to keep his scheme intact, so he really had to butter Wyatt up.

In the past, Wyatt has often played second fiddle to Liam (Scott Clifton). He’s enjoying having Bill’s favor for once, but the guilt is just too much to bear. Wyatt can’t sacrifice Liam’s happiness for his own. The Bold and the Beautiful spoilers say Wyatt will spill the big secret and urge Liam to make his decision based on the truth.

Naturally, this admission will bring consequences. For starters, Liam will be furious that Wyatt lied to his face. He may ignore the fact that Wyatt ultimately did the right thing. The trust between these brothers will be broken, so that’s sure to be rough on Wyatt. He’ll really make a mess of their bond.

Of course, Bill will also unleash his wrath. He’ll feel like Wyatt’s ungrateful and disloyal. Bill was prepared to hand over the keys to the kingdom, but his son will be banished from it instead. You can bet Bill will make Wyatt as miserable as possible. Bill’s going to lose his shot with Steffy, so he’ll think Wyatt should suffer for that.

However, the worst part of this will be Katie’s (Heather Tom) disappointment. She’ll also view this as a betrayal in a way. Katie will likely point out that they had an agreement. She’ll hate that Wyatt ruined everything with Bill and led to heartbreak for Hope (Annika Noelle).

The Bold and the Beautiful spoilers hint that a heated “Watie” argument’s looming. Wyatt will defend his confession and maintain that he did what was right. Unfortunately, Katie may not be convinced of that. She may lash out at Wyatt for having loose lips and causing so much destruction.

Bill’s really the one to blame here, but that won’t stop Katie from attacking Wyatt. She’ll think he should’ve left all this alone. B&B fans can expect Katie and Wyatt to go through a rough patch. The Bold and the Beautiful spoilers say that while they’re on the outs, Thorne (Ingo Rademacher) will take advantage of the conflict. He’ll quickly resume his pursuit of Katie and hope that his plan pays off.

Do you hope Wyatt and Katie can work things out? Would you rather see Thorne win Katie over? We’ll give you updates as other B&B news comes in. Stick with the CBS soap and don’t forget to check CDL often for the latest Bold and the Beautiful spoilers, updates, and news.