The Bold and the Beautiful Spoilers: Katie Furious As Brooke and Wyatt Testify For Bill At Custody Hearing – Betrayal Runs Deep

BY hellodrdavis on September 26, 2018 | Comments: one comment
Related : Soap Opera, Spoiler, Television, The Bold and the Beautiful 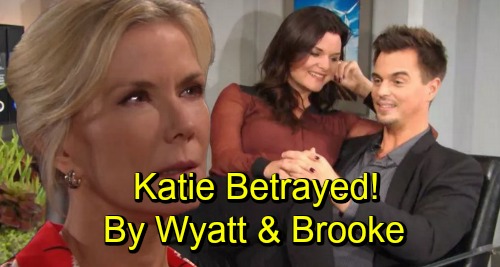 The Bold and the Beautiful spoilers tease that Katie (Heather Tom) is going to face some shockers with respect to her custody case against Bill (Don Diamont). She’s got a lot of support from Thorne (Ingo Rademacher) and Ridge (Thorsten Kaye), and she seems to have Liam (Scott Clifton) on her side as well. But not all of her loved ones agree with her decision to seek full custody of Will (Finnegan George).

Brooke has made it clear that she’s squarely on Bill’s side of the case. She truly believes that it’s in Will’s best interest to have as much access to his father as possible. Katie has tried to explain to Brooke that she simply wants more control over Will’s schedule and visitations, but Brooke just can’t get on board with Katie’s decision.

But Brooke is going to do more than just make her opinion known to Katie. B&B spoilers say that Brooke will testify in court on Bill’s behalf. That means that Katie’s own sister is going to publicly argue against her, which is going to be hard for Katie to take. Katie will feel angry, betrayed, and hurt, but she probably won’t be that shocked by Brooke’s actions. After all, Brooke has betrayed her before…with Bill.

But what probably will shock Katie is Wyatt’s (Darin Brooks) testimony. Wyatt has been subpoenaed to testify on behalf of his dad, and it seems that Wyatt really does believe that Bill should maintain joint custody of Will. Bill’s done a lot of hurtful things to Wyatt in the past, but Wyatt tends to overlook those things easier than a lot of people would.

Katie likely will be disappointed and bewildered by Wyatt’s decision to stick up for his dad. She and Wyatt were close once, and she knows what Bill did to him and how much it hurt him. Plus, it wasn’t that long ago that Bill forced Katie and Wyatt to call off their own engagement. She’ll probably be stunned that Wyatt would take his dad’s side after all of that past nonsense.

Time will tell just how much Brooke’s and Wyatt’s testimony will hurt Katie’s case. But no matter how the case comes out, Katie will have to deal with the anger and betrayal she feels as a result of their failure to support her in the case. For Brooke and Katie especially, the relationship will probably be in a state of repair for a while.

Do you think Brooke and Wyatt are right to testify on behalf of Bill? Stay tuned to the CBS soap and don’t forget to check CDL often for the latest Bold and the Beautiful spoilers, updates, and news.