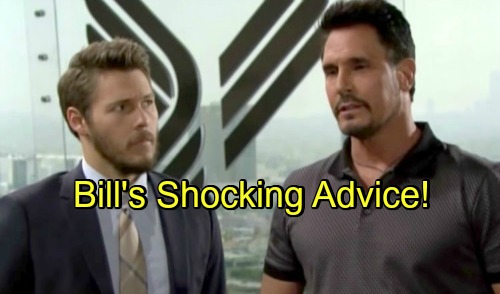 The Bold and the Beautiful (B&B) spoilers tease that Liam (Scott Clifton) will decide to deliver a warning. He’ll be grateful that Steffy (Jacqueline MacInnes Wood) backed out of marrying Bill (Don Diamont), but he’ll obviously still have concerns about his father. Bill has been fixated on Steffy for quite some time, so Liam will worry that his dad won’t give up.

During the week of August 6-10, B&B spoilers say Liam will corner Bill. He’ll suggest that they need to get a few things straight. Liam will argue that Steffy and Kelly are off-limits and shouldn’t be bothered. He might let Bill see Kelly occasionally as her grandpa, but he certainly doesn’t want him filling any other role in her life.

Liam won’t want Bill coming around to irritate Steffy either. He’ll insist that enough is enough and hope Bill can follow orders for once. That’s when Bill will catch Liam off guard. The Bold and the Beautiful spoilers say Bill will do something completely unexpected. He’ll provide what seems like a genuine apology.

Liam may be wary since Bill’s been repentant before, but still went back to scheming. He may doubt that Bill’s really going to leave Steffy alone. Nevertheless, it appears that’s what Bill intends to do. Bill will accept that “Still” isn’t in the cards – at least not anytime soon. He might keep a glimmer of hope alive, but he’ll understand that Steffy’s made her choice for now.

In other words, Bill’s going to stop his pursuit. If Steffy ever shows up on his doorstep and claims she made a terrible mistake, Bill would welcome her in with open arms. However, he’s not going to force it. Once Bill makes his new position clear, he’ll surprise Liam once again. He’ll have a warning of his own to pass along.

The Bold and the Beautiful spoilers say Bill will reflect on his mistakes and urge Liam not to make the same ones. He might contend that sometimes love’s worth fighting for and other times it’s too much work. Bill may point out that easy romances can be appealing as well. When it feels right and both people are on the same page, there can be magic in that.

Bill’s been claiming Liam and Hope (Annika Noelle) are meant to be for months. Since he’ll always carry a torch for Steffy, Bill may stand by that – even after he gives up on his dream. Will Liam indeed choose Hope soon, well the latest spoilers say yes, he will. We’ll give you updates as other B&B news comes in. Stick with the CBS soap and don’t forget to check CDL often for the latest Bold and the Beautiful spoilers, updates, and news.