The Bold and the Beautiful Spoilers: Liam and Hope Bond Over Baby Prep – Bill Urges Steffy to Give Up and Accept ‘Lope’

BY Marcy Cohen on July 12, 2018 | Comments: one comment
Related : Soap Opera, Spoiler, Television, The Bold and the Beautiful 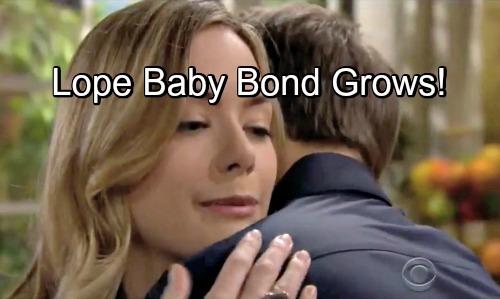 The Bold and the Beautiful (B&B) spoilers tease that the battle for Liam’s (Scott Clifton) heart will rage on. If Hope (Annika Noelle) doesn’t have the upper hand already, she will soon enough. Now that Hope’s pregnancy has been confirmed, it really changes the game.

Steffy (Jacqueline MacInnes Wood) will have to sit on the sidelines and watch Liam prep for a kid with another woman. It won’t be long until Steffy feels Liam slipping away. Remember how hurt and angry Liam was over Steffy’s hookup with Bill (Don Diamont)? What brought them closer? The baby! Liam’s pain and fury slowly melted away as they bonded over impending parenthood.

By the time Kelly arrived, it was all over. Liam couldn’t stay mad when they made something so beautiful together. Of course, it’s a totally different situation with Hope. Unlike Steffy, Hope didn’t sleep with Liam’s father. This B&B pregnancy only happened because of Bill’s manipulation, so Liam sees Hope as an innocent victim.

That should give Hope an advantage as they begin this journey together. She doesn’t have to earn Liam’s forgiveness or make him forget about some terrible betrayal. All Hope has to do is show off her eventual baby bump and play up how great this is going to be. She’ll undoubtedly get Liam excited about raising their child.

The “Lope” baby will bring some huge shifts in this Bold and the Beautiful relationship. Once their first ultrasound arrives, Liam’s bound to get emotional. He was a blubbering mess over Kelly, so he should get weepy over this little one, too.

Naturally, Liam will also view Hope in a different light. As he began to see Steffy as a mother, his love for her grew. You can bet that’ll happen again with Hope. Mama Steffy may feel like old news as Liam drifts toward a newer mom model.

That’s especially true since Bill will inevitably stir the pot. He’ll urge Steffy to see that Liam’s never going to be truly committed to her. Will Steffy believe Liam’s lost forever? Will she give up as Liam and Hope’s connection revs up?