The Bold and the Beautiful Spoilers: Twisted Zoe Anonymously Attacks Multiple Victims – Sally Among the Wronged 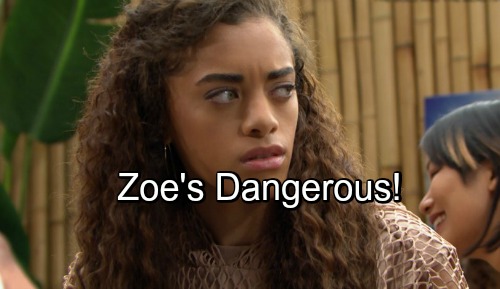 The Bold and the Beautiful spoilers tease that Zoe (Kiara Barnes) is mentally unhinged, which is why she’s already attacked multiple victims without their knowledge. Sally (Courtney Hope) ranks among the wronged.

Zoe looked at Sally’s laptop, which was under a paint cover. That could have easily been an unforced error, but it wasn’t. Zoe had intentionally taken Sally’s computer and used it to send hate messages that initially appeared aimed at Hope (Annika Noelle), when actually they may have been meant for Emma (Nia Sioux).

Thorne (Ingo Rademacher) and Liam (Scott Clifton) noticed the oddly negative posts and kept them secret for a short time. However, they expanded the circle of those in the know which led to the delightful return of Danny Woodburn (Ken) to B&B.

Woodburn gained wide fame for his portrayal of Mickey on Seinfeld in the 1990’s. Kramer’s (Michael Richards) friend was open about being vertical challenged, which created numerous scenes that rank with the most hilarious during that fabled sitcom’s run on NBC.

Ken was called in by Thorne to help track down the anonymous poster. Ken’s affection for Katie (Heather Tom) evoked memories of Woodburn’s Mickey character and followed his character’s past uses of humor during past daytime appearances on B&B.

So, Ken’s efforts resulted in Sally’s IP address being gleaned as the source of the anonymous posts. There was no way for him to know that Zoe used Sally’s computer to seemingly attempt to scare Emma. As viewers were shown, Emma appears with Hope and others in the photo where the comments were posted.

Xander (Adain Bradley) is the true target of Zoe’s passion. They were a pair while living in London. However, Xander just told his cousin Maya (Karla Mosley) and his uncle Julius (Obba Babatunde) that he opted out of his relationship with Zoe because things weren’t going well.

He did mention that Zoe was a good person, but also said that he’d like to keep a low profile because he didn’t want to be found. That logic doesn’t square, as is currently playing out in this fictional Los Angeles town.

Emma and Xander were spotted by Zoe while they were having lunch. After Xander was called back to Forrester by Maya, Zoe purposely bumped into Emma. The intentionally spilled drink allowed Zoe to talk with Emma.

Zoe, like other Sheila-type (Kimberlin Brown) characters, isn’t thinking straight. Clearly Emma will come to know who Zoe is and will instantly cite their first meeting at the outdoor restaurant.

Xander’s safety, along with his new girlfriend’s is certainly at risk. B&B devotees will keep watching to see what happens to him, Emma, Sally and Hope as the summer plays out. CDL is a leading source for everything linked to The Bold and the Beautiful. Check back regularly for B&B spoilers and news!