BY Heather Hughes on July 11, 2018 | Comments: one comment
Related : Soap Opera, Spoiler, Television, The Bold and the Beautiful 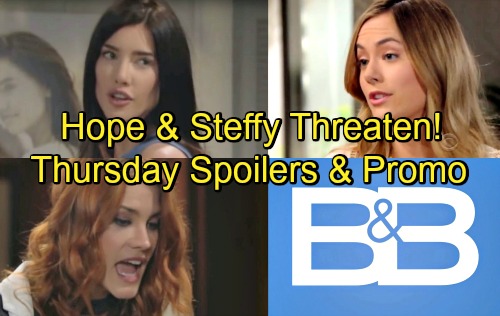 The Bold and the Beautiful (B&B) spoilers for Thursday, July 12, tease that Sally (Courtney Hope) will be in panic mode at Forrester Creations. Katie (Heather Tom) and Thorne (Ingo Rademacher) just confronted Sally about the website threats. They believe she’s responsible, but Sally will continue to deny any posting anything. She won’t understand how she got mixed up in this mess.

Sally will assure Thorne and Katie that she wouldn’t jeopardize her new position. She was grateful for a fresh start at FC, so it wouldn’t make sense to stir up trouble. Sally will maintain that she had nothing to do with any of this. She’ll beg Katie and Thorne to believe they’ve got the wrong person, but they’ll remain suspicious.

The Bold and the Beautiful spoilers say Sally will be on a mission next week. She’ll want to prove her innocence and make sure the true commenter goes down. When Sally sets her mind to something, there’s no stopping her. She won’t let Thorne and Katie drag her name through the mud when the guilty party’s still out there.

There’s a good chance Sally’s investigation will point straight in Zoe’s (Kiara Barnes) direction. Zoe’s already making major waves, but more B&B bombshells are still to come. In the meantime, Hope (Annika Noelle) and Steffy (Jacqueline MacInnes Wood) will square off over Liam (Scott Clifton). Now that Hope’s having Liam’s baby, she has no intention of handing him over to Steffy.

Hope will make it clear that she’s not backing down. She’ll want to give her kid the best life possible, which includes a happy home with Liam. Of course, Steffy won’t let Hope walk all over her. She’ll warn Hope not to interfere with her family, but Hope obviously isn’t going to butt out. Steffy and Hope will both be connected to Liam through their children, so each of them has a right to fight.

Over with Liam, he’ll stop by Wyatt’s (Darin Brooks) place and open up about his dilemma. Liam will talk about Hope’s pregnancy and the chaos it’s causing. He was all set to marry Steffy, but now he’s wondering if Hope’s the better option.

Wyatt will comfort his frazzled brother and suggest that things will work out eventually. Liam’s got a big decision to make, so he’ll just have to weigh his options and trust his instincts. The Bold and the Beautiful spoilers say the drama will get even hotter, so stay tuned. We’ll give you updates as other news comes in. Stick with B&B and don’t forget to check CDL often for the latest Bold and the Beautiful spoilers, updates, and news.