The Bold and the Beautiful Spoilers: Steffy Sets Herself Free, Done with Liam’s Flip-Flopping – Puts Kelly First and Ends Nightmare

BY Marcy Cohen on July 11, 2018 | Comments: one comment
Related : Soap Opera, Spoiler, Television, The Bold and the Beautiful 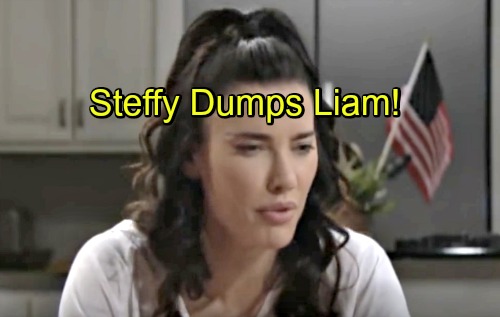 The Bold and the Beautiful (B&B) spoilers tease that Steffy (Jacqueline MacInnes Wood) will have to make a difficult choice. Even the most loyal “Steam” fans are pretty fed up with Liam (Scott Clifton) right now. He can’t stop waffling, so at some point Steffy may decide enough is enough.

Liam has serious commitment issues and they’ll probably never be resolved. The woman he’s with will just have to live in fear of him drifting. There’ll always be another damsel to rescue or ex to impregnate. Is Liam really worth all the pain that comes with him?

In a recent interview with Michael Fairman, B&B’s Jacqueline MacInnes Wood hinted that Steffy has a limit. Giving birth to a daughter changed her world forever. Steffy has to think about what’s right for Kelly. She needs to consider what kind of example she wants to set and focus on the best possible outcome.

Right now, Steffy obviously doesn’t have any kind of stability at all. Liam’s in love with two women and that’s a real problem. Steffy understands that Hope’s (Annika Noelle) pregnancy complicates the situation. She’s trying to give Liam time to sort all this out, but she must know this won’t end well. Liam’s pattern of behavior tells us more trouble’s brewing on The Bold and the Beautiful.

Even Wood thinks Liam’s crossed into pathetic territory. “Liam put Steffy through hell for the last year,” Wood said. “She is supposed to be OK with the questionable things he does?” We say no! Maybe it’s time for Steffy to let Liam go and pass the turmoil torch. It’s Hope’s turn to put up with Liam’s drama.

Do you think Steffy should walk away from Liam? Does she deserve better than B&B’s resident waffler? The Bold and the Beautiful spoilers hint that “Steam” may indeed come to an end – at least for a while. We’ll give you updates as other news comes in. Stay tuned to the CBS soap and don’t forget to check CDL often for the latest Bold and the Beautiful spoilers, updates, and news.