The Bold and the Beautiful Spoilers: Wyatt and Katie Quickly Bond with Romantic Replacements – Do You Like The New Couples?

BY Sean O'Brien on July 11, 2018 | Comments: one comment
Related : Soap Opera, Spoiler, Television, The Bold and the Beautiful 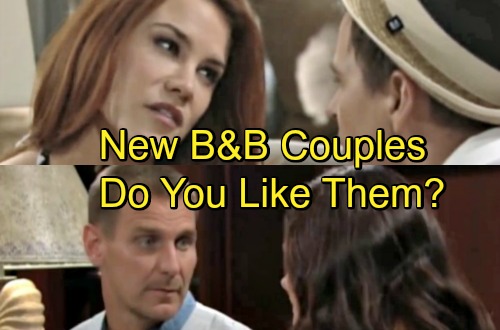 The Bold and the Beautiful spoilers documented Watie’s formation and it’s split. However, various fans of this likeable couple are pleased that they’ve been re-paired with new, intriguing partners.

Wyatt (Darin Brooks) didn’t expect to see Sally (Courtney Hope) at the bar, but he did. This returning character was down on her luck and had a gun, which she later shot at Bill’s (Don Diamont) framed photo inside Wyatt’s house.

Why did Brooks’ character still have that image in view, by the way? Unlike his brother, Wyatt still has hopes of reuniting with his dad someday, apparently.

Wally is proving to be a fun, soapy, summertime inspired couple. That speaks directly to Wyatt’s sense of humor and ability to instantly connect with whatever woman captures his heart.

Sally never anticipated that she would go gonzo over any Spencer ever again. That had nothing to do with Bill, where the romantic angle was concerned, but instead was based off having crushed hard for Liam (Scott Clifton).

The inherent potential of Sally teaming with Wyatt is that she’ll serve as a strong influence in hopefully allowing him to not be taken advantage of by Bill again. Katie was restricted in her ability to protect Wyatt, as Bill is her son Will’s (Zane Alexander Achor) dad. In fact, Katie’s fear of Bill gaining full-custody of Will was a driving factor in her decision to end things with Wyatt.

Back to Korne, or Tatie, if one prefers, they definitely have chemistry. How Bill responds to Thorne being in his son’s mother’s life is an open-question. But Mr. Forrester doesn’t have Wyatt’s biological connection to consider and is a different man, entirely.

Katie was good with Wyatt, but didn’t deserve the very real threat of losing her son that the continuation of Watie likely would have forced. With Thorne, Katie gains someone who is surely smitten and the ability to have a public relationship.

B&B’s revamped couples are interesting. Each duo has the potential to combine their forces and battle Bill in the future. And make no mistake, this Los Angeles villain is the reason why Sally and Thorne had the opportunity to expand their love lives in the directions that they did.