The Bold and the Beautiful Spoilers: Liam and Hope’s Bliss Inspires Steffy’s Search for a New Man – Finds Another Love Story 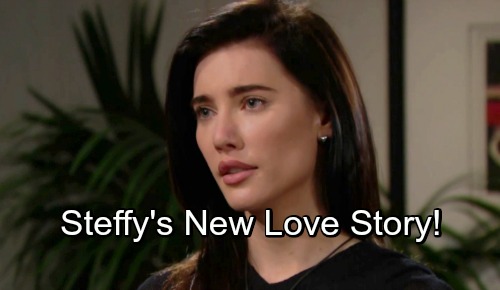 The Bold and the Beautiful (B&B) spoilers tease that marriage will be good for Liam (Scott Clifton). After he ties the knot with Hope (Annika Noelle), Liam will find comfort in the stability of their relationship. They’ll enjoy a “staycation” honeymoon at the cabin and let their love bloom. Hope and Liam obviously rushed into another wedding, but it’ll turn out well for them initially.

Of course, that’ll add to Steffy’s (Jacqueline MacInnes Wood) heartache. She stepped aside and pushed Liam to be with Hope, but watching them bond should leave her distraught. At least before, Steffy could pretend Liam was settling for Hope and would never be as happy as he was with her. Deep down, that might’ve given her some consolation.

However, Steffy may see the genuine growth in “Lope’s” relationship. Things will change, so that should catch her off guard. Hope may have been Liam’s second choice, but we’ll never really know for sure since Steffy took herself out of the equation. With the addition of Hope’s bun in the oven, that sort of leveled the playing field. The battle for Liam’s heart really could’ve gone either way.

That’s why it’ll be easy for Liam to let himself move on. Liam will always be in Steffy’s life through Kelly, so the love they share will never truly go away. Still, Hope and her unborn baby will get the bulk of his attention. Liam will be living with Hope and preparing for their family together, so Steffy should start to feel left out. Will that be the first step toward making some changes of her own?

The Bold and the Beautiful spoilers hint that Steffy may end up back with Liam eventually, but the show has to let “Lope” ride for a bit. Liam needs a relationship that lasts longer than a month or else no one is ever going to take him seriously. Marriage is turning into a joke on B&B as it is!

As a result, the show may give Steffy something else to do in the meantime. Of course, we mean something besides working on the bedroom line. Steffy may decide she wants what Liam and Hope have. She might put herself back out there and try to score some hunky catch. Steffy could get tired of going home alone and attempt to find love like Liam did.

Do you think Steffy deserves a fresh start with someone new? Would you like a slow build back to a “Steam” reunion or should Steffy give up on Liam entirely? We’ll give you updates as other Bold and the Beautiful news comes in. Stick with B&B and don’t forget to check CDL often for the latest Bold and the Beautiful spoilers, updates, and news.