The Bold and the Beautiful Spoilers: Liam and Hope’s Wedding Stopped By Steffy Pregnancy Crisis

BY hellodrdavis on May 16, 2018 | Comments: one comment
Related : Soap Opera, Spoiler, Television, The Bold and the Beautiful 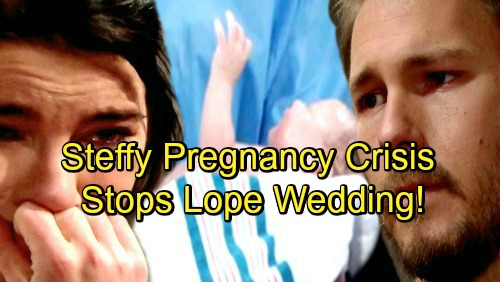 The Bold and the Beautiful spoilers tease that Liam (Scott Clifton) and Hope’s (Annika Noelle) wedding day will be an eventful one, and that’s probably an understatement. There’s certainly a lot of drama surrounding this wedding already, but one thing that’s getting lost in the details is the health and well-being of Steffy’s (Jacqueline MacInnes Wood) baby!

Right now, everyone seems to be wrapped up in their own personal drama. Ridge (Thorsten Kaye) is busy trying to convince anyone who will listen that Bill (Don Diamont) is behind Liam’s decision to marry Hope. Then there’s Wyatt, who is furious over Bill’s lies but will work out a deal with Bill to keep what he learns a secret. Brooke (Katherine Kelly Lang) is fiercely supporting Hope, planning the wedding, and fending off attacks from Taylor (Hunter Tylo).

But nobody seems to be putting Steffy’s baby first, and that’s a mistake. Steffy is beside herself with frustration and worry. Her husband filed annulment papers and immediately leapt into an engagement with her nemesis, Hope. Steffy’s also had to endure harsh words and accusations from Brooke. And although Steffy has Taylor to comfort her, this is a lot of stress for Steffy to endure right now. It can’t be good for the baby.

Things are going to get more stressful for Steffy as the wedding approaches. The Bold and the Beautiful spoilers say that Dr. Phillips (Robin Givens) will be back during the week of May 21st. Will Steffy suffer a complication, or is she just seeing Dr. Phillips for a routine checkup? Of course, routine checkups often lead to discoveries of complications, so we could be headed for a Steffy pregnancy crisis.

Or we could see Steffy go into labor, maybe even during Hope and Liam’s wedding. That could sure put a stop to the ceremony! Perhaps the truth about Bill’s plot to keep Liam and Steffy apart will be revealed, and this will drive Steffy into a rage and straight into labor. The Bold and the Beautiful spoilers say that Steffy will soon choose a name for her daughter. This may be an indication that the baby will be born sooner rather than later.

Will Steffy endure a pregnancy crisis that puts the baby’s health in jeopardy, and/or will Steffy go into labor and put a stop to Liam and Hope’s nuptials? Stay tuned to the CBS soap and don’t forget to check CDL often for the latest Bold and the Beautiful spoilers, news, and updates.