BY Marcy Cohen on July 25, 2018 | Comments: one comment
Related : Soap Opera, Spoiler, Television, The Bold and the Beautiful 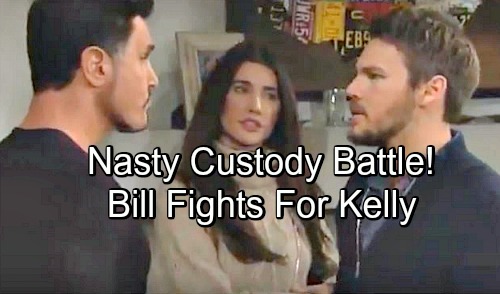 The Bold and the Beautiful (B&B) spoilers tease that Liam (Scott Clifton) will do his best to patch things up with Steffy (Jacqueline MacInnes Wood). He’s been leaning toward Hope (Annika Noelle) lately, but that doesn’t mean he was ready to make his official choice. Liam’s a guy who likes to keep his options open, so he’ll undoubtedly want to keep stringing both women along.

Of course, Steffy’s had it with Liam and his waffling. She made it clear that she’s done, which means Liam won’t have any luck getting through to her. The Bold and the Beautiful spoilers state that Liam will just have to live with the consequences. It’s safe to say he’s not going to like them!

Bill and Steffy’s agreement will bring major drama to B&B. She’ll don his sword necklace as they move forward with their plans. Bill will get the girl of his dreams and Steffy will finally have someone who’s devoted to her. Plus, Steffy will receive plenty of monetary benefits and loads of power. She’ll think it’s a pretty sweet deal in the end.

Liam, on the other hand, will loathe this arrangement. He’ll be appalled by Steffy’s decision to be with Bill, but there won’t be anything he can do about it. Liam may try to win Steffy back, but it doesn’t sound like she’ll budge anytime soon.

In fact, Steffy will likely seek revenge on Liam as well as Hope. She’ll set out to make their lives miserable, which could cause some backlash. The conflict between Liam and Steffy is sure to rev up. Liam also won’t want Bill to be Kelly’s stepdad, which makes this the ideal custody battle scenario. It’s easy to imagine Liam putting his foot down and seeking full custody in court.

However, Bill always seems to have a judge in his pocket. Liam could crash and burn if he takes on his powerful father. Will Liam lose his daughter thanks to his mistake with Hope? Will Steffy keep Kelly away from her daddy? We’ll give you updates as other B&B news comes in. Stay tuned to the CBS soap and don’t forget to check CDL often for the latest Bold and the Beautiful spoilers, updates, and news.