The Bold and the Beautiful Spoilers: Bill Gets Burned by Bitter Steffy – Reckless Deal Brings Financial Disaster and Heartache 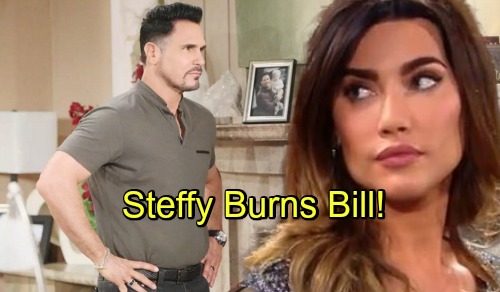 The Bold and the Beautiful (B&B) spoilers tease that Bill (Don Diamont) will remain blinded by his love for Steffy (Jacqueline MacInnes Wood). Bill’s desires have already led to some risky decisions. His choices brought serious drama for Liam (Scott Clifton), Steffy, Hope (Annika Noelle) and even Wyatt (Darin Brooks).

However, Bill will feel good about everything in the end. He won’t have any regrets about what he set in motion. When Steffy returns with an intriguing offer, Bill will believe his dreams are finally coming true. It’s clear that he’ll take Steffy any way he can get her. Bill won’t care if Steffy’s genuinely in love with him or not. He’ll believe that all the pieces will fall into place as time goes on.

As a result, Bill will agree to a dangerous deal. B&B spoilers say Steffy will want Bill to prove his devotion. She’ll think he should put his money where his mouth is, so Bill will go along with Steffy’s terms. It turns out this marriage won’t come cheap! Steffy will likely nix the idea of a prenup, so that’s already setting up a financial disaster. Bill could lose half his fortune if he’s not careful.

Plus, Steffy might make sure she’s got an influential role at Spencer. As long as Liam and Hope are canoodling around Forrester, Steffy may not be too keen on working there. Of course, Steffy will want everything squared away for Kelly’s future. She’ll need legal documents drawn up that cover all her wishes. Bill claims he can make Steffy’s dreams come true, so he’ll truly have to deliver on that.

The Bold and the Beautiful spoilers say Bill will sign whatever Steffy puts in front of him. He may not even hesitate. Naturally, that’ll cause concerns for Bill’s right-hand man. Justin (Aaron D. Spears) always tries to keep Bill from making foolish mistakes, but he never succeeds. Despite Justin’s upcoming advice, Bill will insist on securing his future with Steffy. He won’t worry about the risks in that moment.

Justin may fear that Steffy will reunite with Liam and leave Bill with a raw deal. There’s even a chance this is all a setup. Steffy may want to hurt Bill for what he’s cost her. Regardless, Bill’s blunder should come back to bite him eventually.