BY Heather Hughes on July 24, 2018 | Comments: one comment
Related : Soap Opera, Spoiler, Television, The Bold and the Beautiful 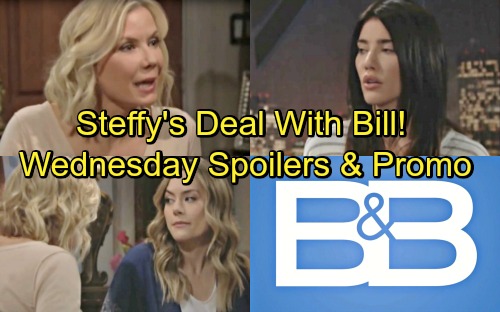 The Bold and the Beautiful (B&B) spoilers for Wednesday, July 25, tease that Brooke (Katherine Kelly Lang) won’t understand Hope’s (Annike Noelle) guilt. She’ll wonder what her daughter’s blaming herself for, so Hope will explain. Thanks to that kiss in the changing room, Liam (Scott Clifton) and Hope have made a real mess.

Steffy (Jacqueline MacInnes Wood) seems to think a “Lope” love affair’s been going on. She believes Liam was off getting busy with Hope while she was recovering from childbirth. Hope will hate that Steffy got the wrong idea and is now in so much pain. Of course, Brooke won’t think Hope should worry about it. She’ll be sorry that Steffy’s hurting, but she won’t want Hope to battle any guilt.

Nevertheless, Hope will continue to fret about Steffy’s heartache and Liam’s attempt to make things right. She still wants to be the only woman in Liam’s life, but this isn’t how she wanted it to go down. The Bold and the Beautiful spoilers say Hope will just have to be patient and see how this all pans out.

Meanwhile, Steffy will finally be open to a life with Bill (Don Diamont). She’ll suggest that Liam holds her to standards he can’t live up to himself. Steffy will declare that she can’t be with a man like that, which will be music to Bill’s ears. He’ll be glad Steffy’s seen the light at last!

Steffy will admit she’s ready to make a change, but there’ll be a big catch. If Bill wants Steffy, he’ll have to play by her rules. Steffy intends to make the most of this relationship, so it’ll be more like a business arrangement for now. Bill will undoubtedly get all the perks of their impending marriage, but Steffy will need some perks of her own. She’ll make some surprising requests during negotiations.

Steffy will assure Bill that he can have what he wants, but it won’t come cheap. However, money’s no object for B&B’s “Dollar Bill” Spencer! He’ll tell Steffy to name her price, so they’ll make a deal soon enough.