The Bold and the Beautiful Spoilers: Liam Begs Bill To Pull Through Coma – Vows To Reconcile With Dad 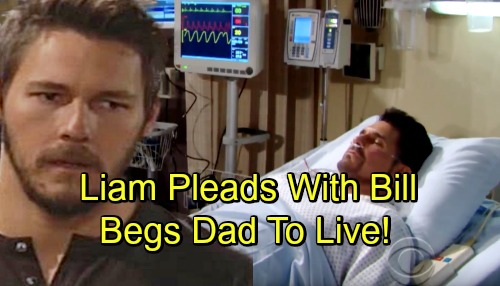 The Bold and the Beautiful spoilers tease that Liam (Scott Clifton) will soon get a big wakeup call. He and Bill (Don Diamont) have just started to put the pieces of their relationship back together. Bill has finally started to act like a real dad again, and Liam has just started to tear down his defenses and let his dad in. Still, it’s a slow go since Liam remains wary of Bill’s motives.

And Liam has every right to be skeptical about his dad’s motives. Bill’s done some awful things, including lying and manipulating Liam and Steffy (Jacqueline MacInnes Wood) into breaking up. Liam isn’t even sure that he wants a full-fledged relationship with his dad again, given all that has taken place.

But soon, it looks like Liam will be re-thinking his feelings about Bill, as Bill is going to suffer a serious health crisis. After a fall from the balcony at his estate, Bill will wind up in a coma and clinging to life. Liam’s going to be horrified by the news and he’ll rush to his dad’s side along with Wyatt (Darin Brooks).

B&B spoilers say that Liam will visit his dad and have a private conversation with him. Patients in comas can often hear what’s going on around them, and Liam will hope that his words of love and encouragement will be heard. Liam may let his dad know just how much he loves him, despite everything that’s gone on this past year.

Liam may even make his dad some promises, as incentive for him to wake up. He might promise to start fresh and forge a relationship with Bill once Bill wakes up, and he’ll probably let Bill know just how much he wants him to be a part of Kelly’s (Gabriel Sporman) life. Liam will want to give his dad plenty of reasons to fight.

Do you think Liam’s words will get through to comatose Bill? Stay tuned to the CBS soap and don’t forget to check CDL often for the latest Bold and the Beautiful spoilers, updates, and news.