The Bold and the Beautiful Spoilers: Liam Cheats with Steffy After Hope’s Miscarriage – Adds to Crushed Wife’s Heartache? 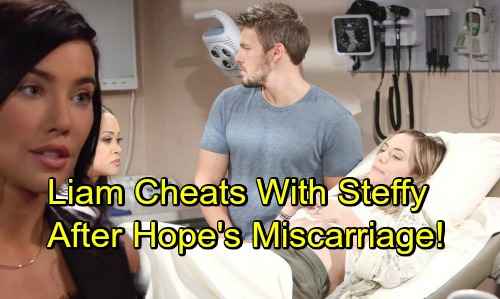 The Bold and the Beautiful (B&B) spoilers tease that Hope (Annika Noelle) and Liam (Scott Clifton) will cope with a baby bombshell on this week’s new episodes, September 3 to September 7. After Hope experienced her difficult episode, Friday, August 31 she will have to be admitted to the hospital.

Liam will be right by her side as she deals with all this. They’ll worry that their little one isn’t going to make it, but they’ll try to have faith that their child’s a fighter.

It appears it’ll just be a bit of a scare for now, but more problems will emerge later, according to B&B buzz. Will Hope actually carry this baby to term? B&B recently gave Liam a kid with Steffy (Jacqueline MacInnes Wood). He’s already got Kelly, so they may not be ready to give him another child just yet.

The Bold and the Beautiful spoilers hint that Liam and Steffy could reunite eventually. Hope still seems like his backup, so Liam may go for his first choice again at some point. Of course, that’d be easier without a baby in the picture. Hope’s pregnancy was a big part of why Liam and Hope pursued this marriage. Everything could fall apart without that kid as the glue.

Hope’s currently thrilled over her impending bundle of joy. She suffered a tragic miscarriage in the past, so she’s excited about this second chance. The fact that she’s having Liam’s baby makes it even better.

However, Hope should probably rein in that enthusiasm. Based on this week’s crisis, things aren’t looking good for the rest of her pregnancy. More scares should follow down the road.

Is Hope destined to have another miscarriage? If so, Hope will undoubtedly be devastated. She could become depressed and push Liam away somewhat. Hope may need some time to grieve and process this on her own.

Naturally, Liam would still need support from someone. He’s still quite close to Steffy, so she’d gladly serve as a shoulder to cry on. That could easily turn into comfort sex. Will Liam cheat and add to Hope’s woes? Considering Liam’s indecisive track record, no one would be surprised.