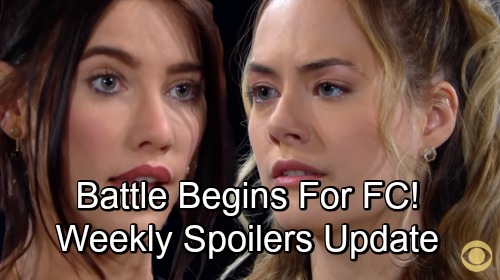 The Bold and the Beautiful (B&B) spoilers update for the week of September 3-7 tease that several characters will battle concerns. First, Liam (Scott Clifton) and Hope (Annika Noelle) will take a terrifying trip to the hospital. A baby crisis will leave them fearful about what the future holds for their family.

The good news is the “Lope” kid will likely be all right – for now anyway. The bad news is Hope will replace baby drama with work chaos. The Bold and the Beautiful spoilers state that the Hope for the Future line will be at risk. Of course, Steffy’s (Jacqueline MacInnes Wood) intimates reboot will be in jeopardy as well. Only one line can stick around at Forrester Creations, so that’ll be a real problem.

Hope and Steffy have been getting along lately, but the tension will return as they fight for their careers. They’ll both make passionate speeches and hope Ridge (Thorsten Kaye) makes the right decision. Naturally, Brooke (Katherine Kelly Lang) will get involved here. She’ll be irritated about the possibility of Hope’s line getting cut.

Ridge will consider everyone’s point of view and prepare to make a difficult choice. He’ll have to kick one daughter to the curb, so will it be Brooke’s or his own? Ridge will need to determine what’s best for FC, but his decision will bring turmoil either way.

Meanwhile, doubts will emerge for Katie (Heather Tom). She’ll begin to wonder if seeking sole custody is really a good idea. Thorne (Ingo Rademacher) will do whatever he can to keep Katie focused. He’ll offer a few words of wisdom and assure Katie of his great love for her. Thorne will promise that Katie won’t be alone in this war.

However, Bill will remain riled as he tries to take Katie down. He’ll get into a fierce argument with Thorne as his threats rev up. B&B spoilers say Bill and Thorne’s feud could make matters worse for Katie. She’ll feel stuck in conflict, but she’ll just concentrate on Will (Finnegan George) and what the boy truly needs.

Later, Bill will ask Brooke to help him out. After she lets him know she’s on his side, Bill will have a surprising request. Bill may wonder if Brooke will visit Katie and try to talk some sense into her. If that doesn’t work, Brooke could always speak up for Bill at the custody hearing. She’ll definitely do everything in her power to keep Bill’s parental rights in play.