The Bold and the Beautiful Spoilers: Liam Horrified By Steffy’s Choice – Realizes Bill Will Raise Kelly

BY hellodrdavis on July 23, 2018 | Comments: one comment
Related : Soap Opera, Spoiler, Television, The Bold and the Beautiful 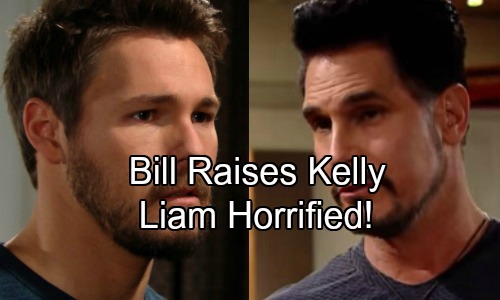 The Bold and the Beautiful spoilers tease that Liam (Scott Clifton) is in for a rude awakening. He’s just had a baby with fiancée Steffy (Jacqueline MacInnes Wood) and has another baby on the way with Hope (Annika Noelle). He’s still processing it all and hasn’t put the pieces together about how he’s going to work out being a committed Dad with two different families.

Thus far, Liam’s been fully focused on choosing between Steffy and Hope. He’s been enjoying himself flirting with Hope and discussing the joys of bringing a Lope baby into the world. And he’s going to get so caught up in those feelings that he’ll do something that will have some shocking unintended consequences.

B&B spoilers say that Lope will get hot and heavy at Forrester Creations, and Steffy will catch them. Devastated and angry, Steffy will ultimately dump Liam and start a life with Bill (Don Diamont), who she knows will be 100% committed to her. Liam will be stunned by Steffy’s decision and losing her will cause him considerable pain and distress.

But it won’t be long before a horrifying realization sets in for Liam. Because of his own actions, Bill will become an integral part of Kelly’s life. Bill will become a parental figure to Kelly and a stepdad if Steffy and Bill get married. This is something that Liam never considered to be a possibility. But then again, Liam doesn’t typically consider the possible consequences of his actions on a regular basis.

Now, however, Liam will come face to face with the consequences of his cheating behavior with Hope. He will not only lose full access to Kelly, but he will have paved the way for another man to be a part of Kelly’s life. And it’s not just any other man…it’s his own estranged father. This is something that Liam will now have to live with.

Will Liam be able to cope with Bill being such a big part of Steffy and Kelly’s lives? Stay tuned to the CBS soap and don’t forget to check CDL often for the latest Bold and the Beautiful spoilers, updates, and news.