The Bold and the Beautiful Spoilers: Liam Marries Hope, But Shocking Setbacks Ruin Everything – No Happily Ever After for Lope

BY Heather Hughes on August 16, 2018 | Comments: one comment
Related : Soap Opera, Spoiler, Television, The Bold and the Beautiful 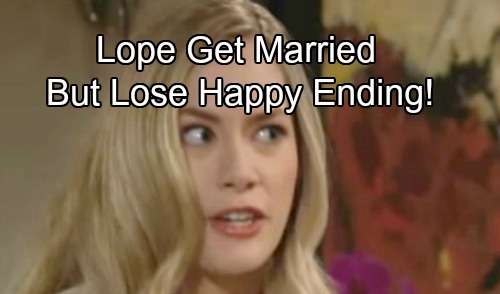 The Bold and the Beautiful (B&B) spoilers tease that Liam (Scott Clifton) and Hope’s (Annika Noelle) wedding day will bring serious turmoil. Hope will worry that they won’t even make it to the vows. Brooke’s (Katherine Kelly Lang) physical fight with Taylor (Hunter Tylo) will certainly leave everyone unsettled. It sounds like the conflict will put the nuptials on shaky ground.

Liam and Hope never actually tied the knot at their last ceremony, so that’ll inevitably be on Hope’s mind. She’ll fear they’re just going to have a repeat of the last time they tried this, but Liam will stick to his goal. He intends to make Hope his wife on new B&B episodes next week, August 20-24, and that’s exactly what he’ll do.

Liam will refuse to let Taylor and Brooke’s feud mess up their plans. He’ll assure Hope that he wants to do this now. Instead of postponing or canceling the wedding, Liam will stand before his friends and family members with Hope by his side.

B&B Lope fans can expect some sweet moments as they declare their love. They’ll commit to a bright future, exchange rings and seal their union with a kiss.

The Bold and the Beautiful spoilers say they’ll officially become Mr. and Mrs. Liam Spencer, so Hope should be over the moon. This couple’s about to kick off a new chapter, but don’t be surprised when obstacles hit soon.

In Soap Opera Digest’s latest issue, Scott Clifton hints that Hope and Liam won’t live happily ever after. It just wouldn’t be a soap if they got the fairytale ending Hope’s longing for!

Liam and Hope’s relationship will definitely be tested, so how will they handle what’s in store? Can they survive the blows ahead? It seems likely that Liam will end up back with Steffy (Jacqueline MacInnes Wood) eventually, so one of “Lope’s” setbacks may be too much for them. It could be a miscarriage, a betrayal or some other soapy surprise.

Regardless, The Bold and the Beautiful spoilers say Liam and Hope’s marriage is doomed! Lope supporters should be disappointed once the next phase of the story plays out. We’ll give you updates as other B&B news comes in. Stay tuned to the CBS soap and don’t forget to check CDL often for the latest Bold and the Beautiful spoilers, updates, and news.