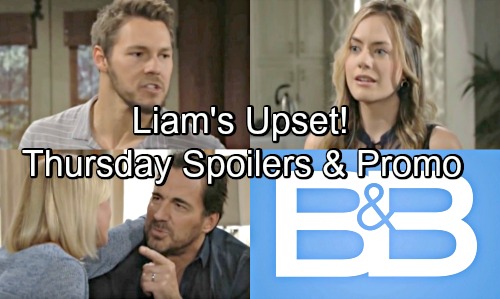 The Bold and the Beautiful (B&B) spoilers for Thursday, August 16, tease that Liam (Scott Clifton) will move forward with wedding plans. He’s committed to Hope (Annika Noelle) and their future, so he has to get ready to tie the knot. Liam will pay Wyatt (Darin Brooks) a visit with an important topic on his mind. He’ll ask his brother to be the best man at his upcoming nuptials.

Wyatt will be surprised by how fast Hope and Liam’s relationship is moving. He’ll question if Liam really knows what he’s doing here. Most people take their time and date someone before getting engaged. Liam, on the other hand, doesn’t seem to think dating exists. He just jumps into marriage after marriage, so Wyatt will push him to take a step back for once.

Liam apparently wants to be a devoted family man and Hope’s giving him that opportunity. He can’t do right by Steffy (Jacqueline MacInnes Wood) now, but Hope and her baby have given him a second chance. Liam will try to convince Wyatt that this marriage is in his best interest. He’ll ask Wyatt to get on board and let it go.

Other Bold and the Beautiful spoilers say Hope will seek harmony. She’ll suggest that this isn’t about winning or losing. Hope just wants to see Liam’s families come together as one. She’ll think having Steffy at the wedding would be a nice start, so Steffy will agree to come with a plus one.

It turns out Taylor (Hunter Tylo) will be the guest Steffy has in mind. She’ll ask her mom to attend with her, but that could be a serious mistake. Taylor definitely has a couple B&B tricks brewing. In the meantime, Ridge (Thorsten Kaye) and Brooke (Katherine Kelly Lang) will stick to the plan. They’ll focus on their own romance and share some sweet moments.

Ridge will feel like falling in love with Brooke is the best thing he’s ever done. These two are on back on track, but will a disastrous “Lope” wedding derail their relationship again? We’ll give you updates as other Bold and the Beautiful news comes in. Stay tuned to B&B and don’t forget to check CDL often for the latest Bold and the Beautiful spoilers, updates, and news.