The Bold and the Beautiful Spoilers: Liam Reels After Steffy Picks Bill – Begs Her to Reconsider, But Steffy Stands by Her New Man

BY Heather Hughes on July 20, 2018 | Comments: one comment
Related : Soap Opera, Spoiler, Television, The Bold and the Beautiful 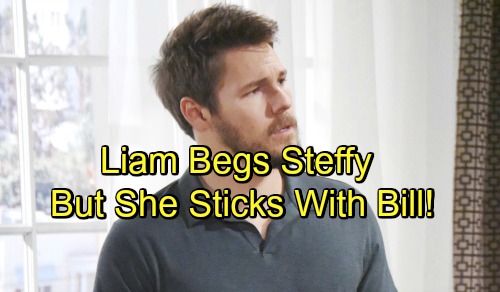 The Bold and the Beautiful (B&B) spoilers tease that Liam (Scott Clifton) will soon be more conflicted than ever. Hope’s (Annika Noelle) pregnancy really threw Liam for a loop, so he’s been trying to process his feelings and make a decision. Liam can only be with one woman, but it’s tough to walk away from Steffy (Jacqueline MacInnes Wood) and their daughter. He truly loves his happy family.

Nevertheless, Liam and Hope have a real connection as well. Now that they’ve got a baby on the way, it’s already starting to pull them closer. Bill (Don Diamont) will take advantage of that by showing Steffy some evidence of “Lope’s” love. Once Steffy sees a picture of their warm moment, she’ll eventually witness the real thing at Forrester Creations.

Seeing Liam and Hope’s kiss will leave Steffy devastated. She’ll make Bill the happiest man alive by agreeing to have a relationship with him. However, the news obviously isn’t going to sit well with Liam. He’ll have major regrets about the lip lock, so he’ll track Steffy down and offer a sincere apology. That’s when a B&B bomb will drop.

Liam’s in for a rude awakening when he realizes Steffy’s officially done with him. She’ll reveal that she’s choosing to build a life with Bill instead. Naturally, The Bold and the Beautiful spoilers say Liam will object. He won’t want the man who ruined their marriage to emerge victorious. Liam won’t be happy about Bill becoming Kelly’s stepdad grandpa either!

At the same time, Liam may not want to be too harsh here. He’ll understand that he’s broken Steffy’s heart. Liam will assure Steffy that he’s sorry for letting his emotions take control. He’ll probably argue that he just got caught up in the excitement with Hope. Between the successful fashion show and their impending bundle of joy, there’s a lot to celebrate.

Liam may beg Steffy to back out of her deal with Bill. This may even convince him that he truly wants a future with Steffy, not Hope. Unfortunately, it’ll be too late for desperate pleas. Steffy will stand by her new man, so it sounds like Liam will have to stick with Hope for now.