BY Sean O'Brien on May 30, 2018 | Comments: Leave Comments
Related : Soap Opera, Spoiler, Television, The Bold and the Beautiful 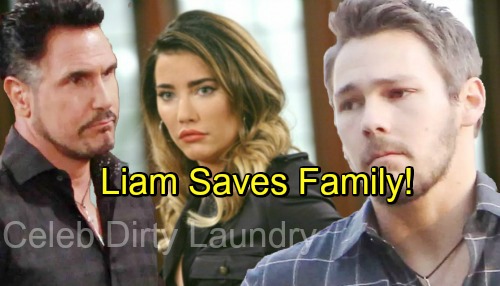 Okay, reader(s), visually place yourself in Liam’s position. You’re wearing a sharp tuxedo, gazing into the eyes of a sweet, intelligent, beautiful babe who came all the way back from Europe still loving you. Hope (Annika Noelle) genuinely wanted Steam to resolve it’s differences and when that didn’t happen she instantly accepted your offer of marriage.

However, there’s another intelligent and beautiful woman who’s carrying your baby. You just finalized an annulment with her. Oh, and Steffy would be defined as having moxie, instead of being sweet when compared to Hope.

Your dad, Bill, might well be the most diabolically deranged character in all of sunny Los Angeles. Fill Dodgers’ stadium with creeps and he is likely the creepiest.

Those who are once and forever anti-Steffy aren’t willing to even consider that she was taken advantage of. In stark contrast, Steffy fans believe that Dollar Bill committed a moral crime by bedding his son’s wife and then pressing to marry her on many occasions since. Plus, he’s most recently implied, again, that he’d turn in Taylor (Hunter Tylo) if Dollar Still doesn’t happen.

Kaye’s character naturally backed his daughter after learning the unseemly truth about last fall. Then, when it seemed like Dollar Still was back together, Ridge saw right through Bill’s manipulative lie.

Ridge has been fully vindicated. Steffy has been telling the truth all along. She remains fully ashamed for having been with Bill that one horrid time last fall. Well, it apparently wasn’t horrid as it was happening based on the length of their session. But readers know that Steffy regretted the mistake and understand that the consequences she’s suffered since taught her a massive life lesson.

If Liam is able to explain everything, a seemingly unexpected chance for Steam’s revival will be realized. Steffy wants it and now, maybe Liam wants to try again too. Kelly’s future, which is more important than everyone’s feelings, depends on whatever her parents decide. CDL is a leading source for everything linked to The Bold and the Beautiful. Check back regularly for B&B spoilers and news!