BY Heather Hughes on May 29, 2018 | Comments: 2 comments
Related : Soap Opera, Spoiler, Television, The Bold and the Beautiful 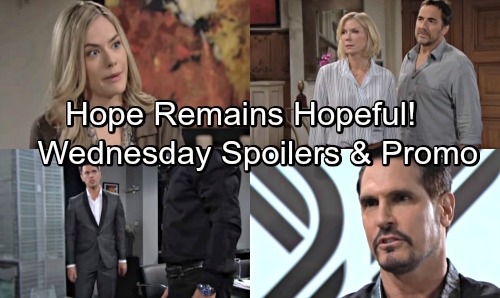 The Bold and the Beautiful (B&B) spoilers for Wednesday, May 30, tease that Wyatt (Darin Brooks) and Bill’s (Don Diamont) conflict will explode. Bill was expecting to hear that Liam (Scott Clifton) and Hope (Annika Noelle) tied the knot, but Wyatt delivered the news of his betrayal instead. Now it’s time for this father and son to have a fierce faceoff.

Bill will wonder why Wyatt would go against his wishes like this. He’ll think Wyatt’s ungrateful after everything that was handed to him. However, Wyatt will argue that Bill doesn’t care about his children. He’ll suggest that he’s tired of this punishment and reward system.

If Wyatt stays in line, he gains Bill’s favor. If he dares to cross him, Wyatt’s kicked to the curb just as fast. He’ll point out that’s not how families should work. The Bold and the Beautiful spoilers say Wyatt will be done with Bill’s schemes and conditional love. He’s had enough, so he’ll plan to be his own man from now on.

Bill will feel like it’s good to know where they stand. He’ll snarl that Wyatt just made the worst mistake of his life, so it sounds like that confession to Liam will cost him. Meanwhile, Brooke (Katherine Kelly Lang) will be concerned about her daughter. She’ll hate that the wedding was called off, but Hope will insist that it was for the best.

B&B fans know Hope wants to marry Liam, but not like this. She’ll tell Brooke and Ridge (Thorsten Kaye) that her relationship with Liam’s still on track. Hope will point out that they love each other and will ultimately reschedule their nuptials. She’ll just want to make sure they wed out of their own freewill. A marriage based on Bill’s manipulation isn’t what either of them had in mind.

Of course, Ridge will be convinced that Liam’s going back to Steffy. He’ll remain at odds with Brooke, so their relationship could be on rocky ground. Later, Steffy will manage to get on Hope’s bad side. She’ll contend that Bill’s evil plan was the only reason Hope ever won Liam’s heart.

Sometimes the truth hurts! Nevertheless, Hope will feel like Steffy’s dismissing the “Lope” love story. They’ll have a heated showdown, so stay tuned for all the drama. We’ll give you updates as other Bold and the Beautiful details emerge. Stick with B&B and don’t forget to check CDL often for the latest Bold and the Beautiful spoilers, updates, and news.