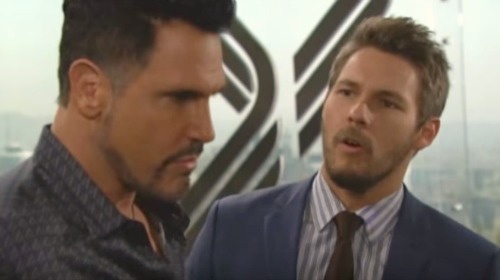 The Bold and the Beautiful (B&B) spoilers tease that Liam (Scott Clifton) and Steffy (Jacqueline MacInnes Wood) have plenty of frightening moments ahead of them. After Steffy gives birth prematurely, she’ll worry about the fate of her little one. Likewise, Liam will battle some strong fears. He’ll reassure Steffy, but he’ll certainly be concerned deep down.

Dr. Phillips (Robin Givens) may warn Liam and Steffy that Kelly’s going to struggle. She needed more time to develop in the womb, so this early birth will be rough on her. Fortunately, it looks like Kelly will be just fine eventually. That should bring Steffy and Liam great relief, but it won’t alleviate their anger toward Bill (Don Diamont).

Liam’s already furious with his father, but his rage will soon soar to a startling new level. The Bold and the Beautiful spoilers say Steffy will fill Liam in on what happened. She’ll note that she fell after slamming the door on Bill.

If we’re being honest, Steffy’s own clumsiness is partially to blame here. However, it’s true that Bill had no business coming back to bother her. He’s an obsessed creep who needs to leave Steffy alone. The Bold and the Beautiful spoilers state that Liam will track Bill down for another confrontation. This time he may deliver more than just criticism and insults.

Liam will explode at Bill for putting both Steffy and the baby in harm’s way. He’ll feel like this is all his sick dad’s fault. Liam will suggest that this proves Bill can’t be involved in Kelly’s life. He may take legal steps to make sure of that. Steffy and Liam should really consider getting a restraining order. It might be the only way to keep Bill away from them.

Of course, Liam might decide to take matters into his own hands instead. Will he vow to seek revenge for Steffy’s fall? This ordeal could’ve cost Liam’s daughter her life. That’s something Liam may never be able to get past.

B&B spoilers say we could see a darker side of Liam in the months ahead – at least when it comes to Bill. Liam will be a doting daddy at home, but he could step up his game in his war with his ruthless father. Bill may be underestimating the power of a protective dad’s determination!

It sounds like some the excitement’s about to rev up. We’ll give you updates as other B&B news comes in. Stay tuned to the CBS soap and don’t forget to check CDL often for the latest Bold and the Beautiful spoilers, updates, and news.