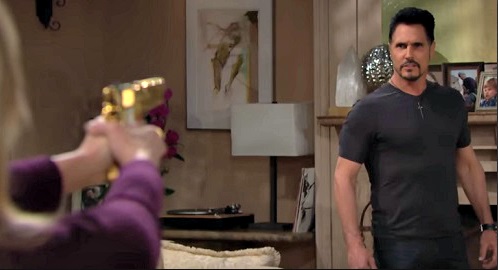 The Bold and the Beautiful (B&B) spoilers for Monday, April 16, tease that Steffy (Jacqueline MacInnes Wood) will refuse to budge on her stance. She’s convinced that Liam’s (Scott Clifton) wrong about being the shooter. Steffy will suggest that she just can’t believe that Liam did this. She’ll know in her heart that Liam wouldn’t be capable of that, even while battling a head injury.

Steffy will insist that they have to find the person who did this. She’ll hope they can solve the mystery and give Liam some peace of mind. The Bold and the Beautiful spoilers say Liam will still believe he’s responsible, but he’ll appreciate the way Steffy’s got his back. She’ll assure Liam that she’s always going to stick up for him. B&B fans can definitely expect some warm “Steam” moments.

Meanwhile, Ridge (Thorsten Kaye) and Brooke (Katherine Kelly Lang) will continue their chat about Taylor (Hunter Tylo). After Ridge filled Taylor in on Bill’s (Don Diamont) actions, he expected she’d show up in town right away. Ridge will wonder why it took Taylor so long to confront Bill, but he’ll at least be glad she’s here now. He thinks Bill deserves all the backlash the family can give. 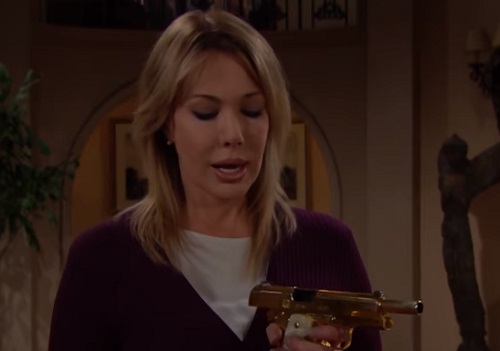 Of course, Taylor actually appeared in Los Angeles sooner than Ridge realizes. She just told Bill that she was the one who shot him that night. Now she’s contemplating doing it again! The Bold and the Beautiful spoilers state that Taylor’s hands will shake as she grips the gun. She’ll want to pump another bullet in Bill and finish the job, but she just won’t be able to do it.

Bill will be glad once his life is spared, but what will he do about Taylor’s confession? It looks like Bill will keep his mouth shut and preserve his upper hand with Liam. Things could work out much better for Bill that way. He still wants Steffy and blackmail is his best shot at achieving his goal.

Back with Brooke and Ridge, they’ll mull over Bill’s puzzling decision. He ultimately cleared Ridge’s name and they’ll want to know why. The Bold and the Beautiful spoilers say Ridge and Brooke will go over some potential motives. They’ll be sure that Bill did it for some type of selfish gain.

It sounds like some fantastic scenes are coming up. We’ll give you updates as other B&B news comes in. Stay tuned to the CBS soap and don’t forget to check CDL often for the latest Bold and the Beautiful spoilers, updates and news.