BY Heather Hughes on August 3, 2018 | Comments: one comment
Related : Soap Opera, Spoiler, Television, The Bold and the Beautiful 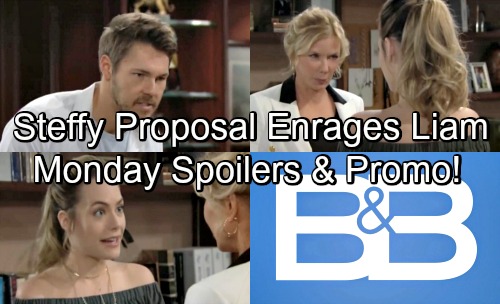 The Bold and the Beautiful (B&B) spoilers for Monday, August 6, tease that Brooke (Katherine Kelly Lang) will battle confusion. Hope (Annika Noelle) will have some good news to share, but it’ll be a lot for Brooke to take in. Steffy (Jacqueline MacInnes Wood) just decided to take off her ring and give it to Hope. She pushed Liam (Scott Clifton) to be with her former rival, so Hope’s excited about the future.

Steffy made it clear that Hope and Liam have her blessing. She’s tired of all fighting and wants to set a better example for her daughter. Kelly’s what matters most to Steffy, so she’s taking herself out of the game. Brooke will be thrilled that Hope’s finally getting what she wants. She’ll marvel over the way Steffy proposed to Hope for Liam. Brooke may feel like they can all find peace and happiness.

Hope will agree that Steffy’s move was a pleasant twist. She’ll be glad that everything magically came together. Hope will believe her dreams are coming true, but Liam won’t be as satisfied nearby. In the other room, Liam will scold Steffy for overstepping with Hope. He’ll argue that the decision to propose should’ve been his and his alone.

Steffy may contend that she just gave Liam the nudge he needed. She knows him better than he’d like to admit. Liam isn’t a very decisive person, so Steffy may think she did him a favor. Now that the pressure’s off, Liam can just settle down with Hope and focus on their impending bundle of joy.

The Bold and the Beautiful spoilers say Liam will remain agitated and concerned. He may feel like it’s a mistake to rush into another marriage, but he probably won’t want to let Hope down. Steffy’s got Hope all excited now, so Liam will be stuck in a tight spot.

Other B&B spoilers say Emma (Nia Sioux) will hit the roof over Zoe’s (Kiara Barnes) new job. Thorne (Ingo Rademacher) just hired her as a model, so Emma will give him a piece of her mind. She’ll insist that Zoe’s risky behavior will only lead to trouble.

Emma won’t change Thorne’s mind, so she’ll just have to get used to the idea. Since Zoe’s going to be around more often, The Bold and the Beautiful fans can expect plenty of faceoffs. We’ll give you updates as other B&B details emerge. Stay tuned to the CBS soap and don’t forget to check CDL often for the latest Bold and the Beautiful spoilers, updates, and news.