The Bold and the Beautiful Spoilers: Monday, December 17 – Steffy Explodes Over Hope’s Attempt to Exile Taylor – Liam Takes Ex’s Side

BY Heather Hughes on December 14, 2018 | Comments: one comment
Related : Soap Opera, Spoiler, Television, The Bold and the Beautiful 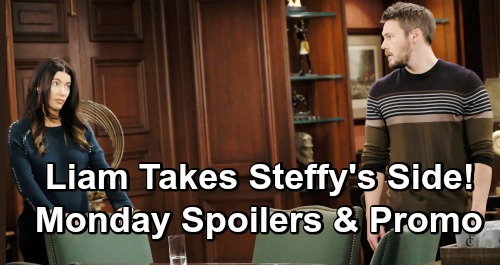 The Bold and the Beautiful (B&B) spoilers for Monday, December 17, tease that Hope (Annika Noelle) will push Steffy (Jacqueline MacInnes Wood) to her limit. Steffy was hoping they could all get on the same page about what’s best for their daughters. Unfortunately, they’ll express very different ideas about how to achieve that.

Liam (Scott Clifton) will keep intervening as the confrontation escalates. He’ll try to calm Hope and Steffy down repeatedly, but he’ll fail each time. They’ll only become more and more agitated with each other. Hope will suggest that if Steffy wants to let Kelly be around Taylor (Hunter Tylo), there’s nothing she can do about it. Steffy is Kelly’s mom, so she’s obviously going to respect that boundary.

However, Hope will expect Steffy to do the same when it comes to Liam’s second daughter. She’ll hate to burst Steffy’s bubble, but she’ll insist that their kids are never going to be as close as any of them would like. As long as Taylor’s so heavily involved in Kelly’s life, Hope won’t let her kid anywhere near her sibling. She’ll contend that Kelly can’t have what Steffy had with her twin, Phoebe.

The Bold and the Beautiful spoilers say Hope will offer an alternative. She’ll point out that everything would change if Taylor backed out of this whole moving in thing. If Taylor left Los Angeles, Hope would be willing to revisit the topic of raising their kids as close sisters.

Of course, Steffy will object to Hope thinking she can run the show. She’ll feel like all Hope does is take, take, take. B&B fans can expect Steffy to go off on Hope in big way. She’ll contend that she lost her marriage and Kelly lost a full-time father at the house. Steffy will rant that now Hope’s trying to exile her mother, too. She’ll think Hope is controlling and selfish for all the damage she’s caused.

The Bold and the Beautiful spoilers say Liam will defend Hope, but he’ll end up defending Steffy’s view on Taylor, too. He’ll admit he keeps going back and forth on this, which isn’t surprising. Liam is a chronic flip-flopper in all areas of his life.

In the end, Liam will think it all boils down to one question. Would Taylor actually hurt her own granddaughter? Liam just won’t see any scenario where that would happen, so he’ll ultimately land on Steffy’s side. He’ll think a peaceful solution has to be possible.

Other Bold and the Beautiful spoilers say Wyatt (Darin Brooks) and Sally (Courtney Hope) will bask in the afterglow of their love professions. They finally said “the L word,” so their relationship will be moving into deeper territory. Let’s hope Sally and Wyatt can keep their romance going strong!

B&B viewers won’t want to miss Monday’s exciting episode. We’ll give you updates as other news comes in. Stay tuned to the CBS soap and don’t forget to check CDL often for the latest Bold and the Beautiful spoilers, updates and news.