The Bold and the Beautiful Spoilers: Monday, July 16 – Xander Tells Crazy Zoe to Get Lost – Sally’s Backed into a Tricky Corner

BY Heather Hughes on July 13, 2018 | Comments: one comment
Related : Soap Opera, Spoiler, Television, The Bold and the Beautiful 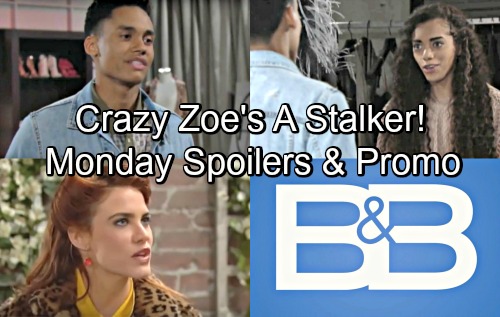 The Bold and the Beautiful (B&B) spoilers for Monday, July 16, tease that Xander (Adain Bradley) will face an unpleasant surprise. Zoe (Kiara Barnes) will come out of the shadows and corner him for a chat. Xander hoped he could get away from his apparently crazy ex and leave all that chaos behind. Instead, Zoe managed to track him down for another round of obsessed drama.

A frustrated Xander will ask why Zoe’s at Forrester Creations. He definitely won’t be happy about her showing up out of the blue. Zoe will insist that she’s there to see Xander and make amends. Of course, Xander will argue that it’s too late for that. He’ll think Zoe needs to go back home and leave him alone.

Xander’s trying to make a new life for himself and he’s already found happiness with Emma (Nia Sioux). He understands that Zoe’s toxic, so her wild behavior could easily screw up his new romance. B&B fans know that’s exactly what Zoe has in mind! However, she’ll focus on the aspect of making peace. Zoe will wonder how she’s supposed to apologize if Xander won’t even talk to her.

Despite Zoe’s best efforts, Xander will shut down her attempts to explain and say she’s sorry. It looks like Zoe will have to work harder, which means bad news is headed Emma’s way. Meanwhile, Sally (Courtney Hope) will keep defending herself against the threat accusations. She won’t be able to explain how the comments were posted on her laptop, but she’ll promise that she’s not to blame.

The Bold and the Beautiful spoilers state that Katie (Heather Tom) and Thorne (Ingo Rademacher) will remain skeptical. They’ll feel like all the signs point to Sally, so she must be responsible. Liam (Scott Clifton) isn’t as convinced of Sally’s guilt, but he may admit this is all pretty odd.

As suspicions continue to swirl, Sally will realize she’s only got one option. She has to prove her innocence by finding the real culprit. The Bold and the Beautiful spoilers say Sally will work hard to save her career and clear her name. It won’t be long until her search for answers leads to Zoe.

A shocking faceoff’s coming up later this week, so stay tuned for Sally and Zoe’s exploding conflict. We’ll give you updates as other B&B details emerge. Stick with the CBS soap and don’t forget to check CDL often for the latest Bold and the Beautiful spoilers, updates, and news.