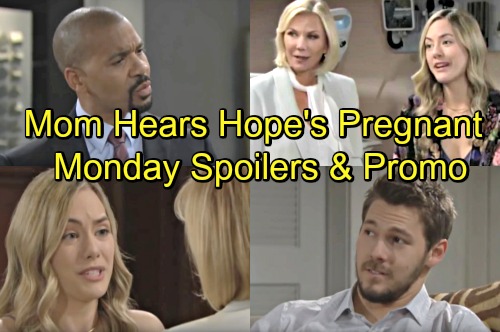 The Bold and the Beautiful (B&B) spoilers for Monday, July 2, tease that Hope (Annike Noelle) will tell Brooke (Katherine Kelly Lang) the results of her pregnancy test. She’ll admit she’s indeed having Liam’s (Scott Clifton) baby. Hope will quickly start to panic over this life-changing news. She’ll stammer that she doesn’t know what to do, so she’ll be counting on Brooke for advice.

Fortunately, Brooke will remain calm and supportive. She’ll insist that Hope’s going to get through this, but she needs to be honest with Liam. They’ll agree that the “baby daddy” has to be informed ASAP. Hope will ultimately decide that she’s going to raise this child with or without Liam’s help, but we all know he won’t walk away from his kid.

Brooke realizes this isn’t the ideal situation, but she’ll definitely be hopeful about “Lope’s” future. She’ll think this baby could bring them together and she might be right! For now, Hope will mull over how she’s going to tell Liam. After an interruption or two, she’ll fill him in later this week.

In the meantime, Liam will contemplate a mystery with Thorne (Ingo Rademacher). A frightening comment just showed up on the Hope for the Future website. Someone claims he or she’s coming after Hope, so that’ll be troubling to Thorne and Liam. They’ll wonder who left this nasty message, but B&B fans already have a few suspects.

Sally (Courtney Hope) was just on the website, so she’s a potential threat. However, Pam (Alley Mills) has also been harassing Hope over Liam. Even Maya’s (Karla Mosley) been riled by Hope lately. Of course, there’s also a chance the commenter is someone far more menacing. Liam and Thorne will hope they can figure this out and thwart a potential attack.

Later, The Bold and the Beautiful spoilers say Liam will head home to Steffy (Jacqueline MacInnes Wood). The proud parents will talk about what it’ll be like when Kelly’s a teenager. Steffy and Liam will reiterate that they’re committed to each other, so their relationship’s clearly in a good place. They should enjoy it while it lasts. Hope’s baby shocker will soon burst their bubble!

Finally, Justin (Aaron D. Spears) will urge Bill (Don Diamont) to leave “Steam” alone. He’ll suggest that Bill’s done enough damage and should just back off. Bill will drop his blackmail plot before long, but it won’t matter since Hope’s next in line to cause drama.