The Bold and the Beautiful Spoilers: Monday, May 14 – Bill Pushes Justin Too Far – Ridge and Brooke Clash Over Hope and Liam

BY Heather Hughes on May 11, 2018 | Comments: 2 comments
Related : Soap Opera, Spoiler, Television, The Bold and the Beautiful 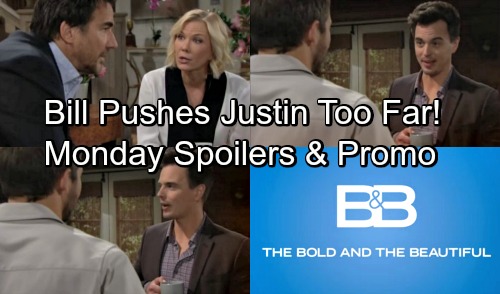 The Bold and the Beautiful (B&B) spoilers for Monday, May 14, tease that Wyatt (Darin Brooks) will remain puzzled over Steffy’s (Jacqueline MacInnes Wood) actions. During a chat with Liam (Scott Clifton), Wyatt will suggest that nothing their father does surprises him. He’s not shocked about Bill’s (Don Diamont) side of the ongoing affair, but he won’t understand how Steffy could betray Liam.

Of course, B&B fans know Steffy’s done nothing wrong – at least not since that fateful night. She’s completely devoted to Liam now, but Bill’s lies are still preventing her happy reunion. Over at Brooke’s (Katherine Kelly Lang) place, she’ll wrap up her heated confrontation with Steffy. Brooke’s sick and tired of Steffy acting like Hope’s (Annika Noelle) a menace for loving Liam. 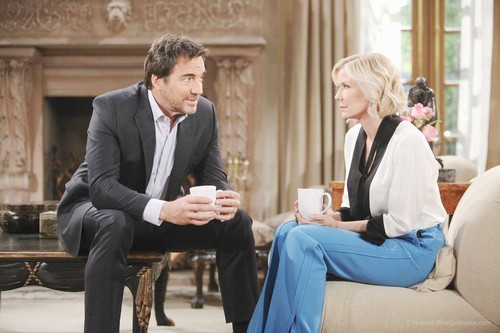 It’s true that Hope’s timing isn’t the greatest. Steffy’s pregnant with Liam’s child, so this feels a little like a trap on Hope’s end. Nevertheless, Liam’s the one who proposed. Steffy has played dirty plenty of times, so Hope might as well enjoy what we assume will be a short-lived victory.

Later, Ridge (Thorsten Kaye) and Brooke will bicker about this complicated situation. He’ll maintain that Bill’s behind Steffy and Liam’s latest drama. Ridge will try to get Brooke on Steffy’s team, but she’ll insist on supporting Hope. Brooke will state that her daughter deserves happiness, so she definitely won’t be budging anytime soon. Ridge is on his own if he wants to prove Bill’s guilty. 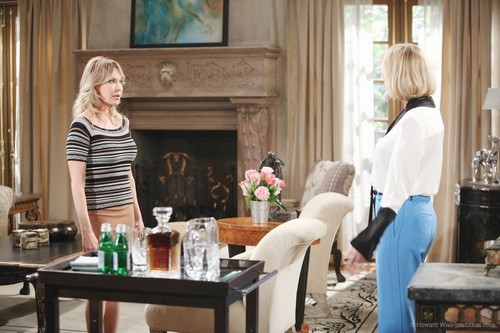 Speaking of guilt, Justin (Aaron D. Spears) will face a good dose of it on Monday’s new B&B episode. The Bold and the Beautiful spoilers say his conscience will get the best of him. Justin will decide he’s had enough of carrying out all these shady plans. He’ll rant about how he always has to cause chaos for Bill’s benefit.

Bill will reiterate that this will work out for everyone eventually. He’ll think Justin just needs to chill and let the magic happen. Unless Justin wants to get fired, he needs to learn to live with Bill’s devious ways. We’ll give you updates as other Bold and the Beautiful news comes in. Stay tuned to B&B and don’t forget to check CDL often for the latest Bold and the Beautiful spoilers, updates, and news.