The Bold and the Beautiful Spoilers: Monday, September 17 Update – Brooke Tells Bill To Back Off – Katie and Thorne Get Engaged

BY hellodrdavis on September 16, 2018 | Comments: one comment
Related : Soap Opera, Spoiler, Television, The Bold and the Beautiful 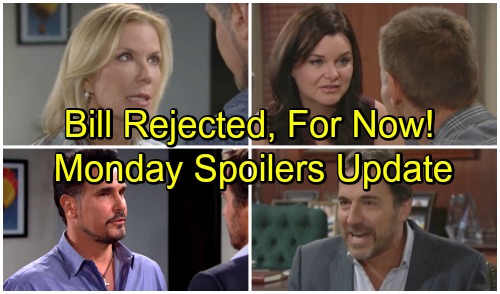 The Bold and the Beautiful spoilers update for Monday, September 17, tease that Brooke (Katherine Kelly Lang) will have a big reaction to the kiss that Bill (Don Diamont) surprisingly planted on her. Bill got caught up in the fact that Brooke is supporting him in his custody dispute with Katie (Heather Tom), and he couldn’t help himself. He just up and kissed her!

But unfortunately for Bill, the reaction he gets from Brooke won’t be the one he was hoping for. After she pulls away from the kiss, she’ll chastise Bill, stating that she’s a married woman and she intends to stay that way. But now Brooke’s in a bind. She was keeping her meetings with Bill a secret from Ridge (Thorsten Kaye), but now she’s got a kiss to keep secret as well!

Next, on the new B&B episode on Monday, September 17, Katie and Thorne (Ingo Rademacher) will discuss Thorne’s marriage proposal. Katie will be pleasantly surprised and happy that Thorne proposed, but she’ll want to get a couple of things straight before she says yes. She’ll want to make sure that Thorne is proposing for the right reasons, and not just because of the upcoming custody case.

She’ll tell Thorne that he doesn’t have to marry her just because it will look good in family court. But Thorne will insist that he wants to marry Katie because he truly loves her. He loves Will (Finnegan George), too, and wants to create a stable family environment with her and for Will. That will be magic to Katie’s ears, and she’ll happily accept.

Later, a thrilled Thorne will tell his family that Katie accepted his marriage proposal. It looks like Ridge in particular will be happy about the engagement. He’ll gloat a bit and feel that Bill is really going to be at a disadvantage in the custody suit. He’ll think that Bill is getting exactly what he deserves.