BY Heather Hughes on September 21, 2018 | Comments: one comment
Related : Soap Opera, Spoiler, Television, The Bold and the Beautiful 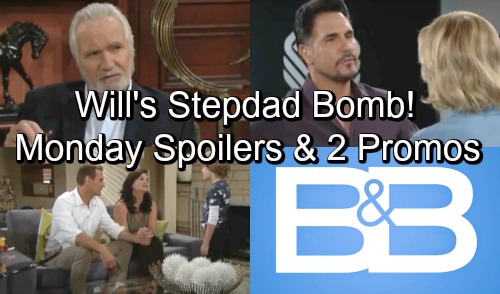 The Bold and the Beautiful (B&B) spoilers for Monday, September 24, tease that Thorne (Ingo Rademacher) and Katie (Heather Tom) will share their big news. They just decided to get married before the custody hearing, so a rushed wedding’s on the way. Of course, Katie and Thorne will want to fill Will (Finnegan George) in. The kid’s facing a lot of changes, but they’ll be gentle with him.

When Will hears that his mom and Thorne are tying the knot, he’ll wonder where that leaves Bill (Don Diamont). The Bold and the Beautiful spoilers say Katie will offer reassurance. She’ll promise that even though Thorne’s going to be Will’s stepdad, it doesn’t mean Bill won’t be his father.

Thorne will pipe up about how much he loves them both and wants to be a family. He’ll do his best to put the boy’s mind at ease. It shouldn’t be too hard to get Will on board. He’s been feeling left out of Bill’s life, so the thought of Thorne being there for him may be comforting.

Once everything’s settled, Katie and Thorne will plan their nuptials. They won’t have long to throw this ceremony together, but they’ll make it happen. Speaking of making things happen, Ridge (Thorsten Kaye) hopes Judge McMullen (Joe Lando) will follow through on his favor. He’ll apply a bit more pressure on Monday and trust that he’ll get the outcome he wants.

Eric (John McCook) will be surprised by how invested Ridge is. He’ll think it’s admirable that Ridge is helping Katie, but he may be suspicious of his fierce need to win. Ridge will suggest that he just wants Will to have a better home situation, but this is really about revenge. It’s clear that Ridge has made this personal. He’s eager to see Bill pay for all the damage he’s caused.

Elsewhere, Bill and Brooke (Katherine Kelly Lang) will share a warm moment. B&B spoilers say Bill will offer some words of appreciation. He’ll insist that Brooke’s assistance means a great deal to him. However, it’s apparent that Brooke’s help won’t be enough. Bill will determine that he has to visit Katie and put a stop to this nightmare. He’ll be ready to unleash all his fury, so expect some tense scenes.