The Bold and the Beautiful Spoilers: Week of September 24 – Rushed Wedding Shocker – Hope and Steffy Agree! 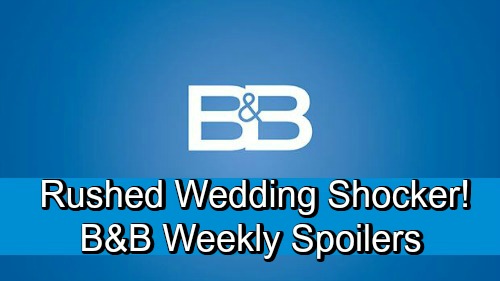 The Bold and the Beautiful (B&B) spoilers for the week of September 24-28 tease that we’ll see plenty of drama. First, Ridge (Thorsten Kaye) will make sure Judge McMullen (Joe Lando) faces even more pressure. He’ll do everything in his power to get the judge to rule in Katie’s (Heather Tom) favor.

Brooke (Katherine Kelly Lang) won’t have a clue what her hubby’s up to, but she’s got no room to talk. B&B fans know Brooke’s going behind Ridge’s back to help Bill (Don Diamont). She’ll keep up her efforts, but Bill will realize he needs a more drastic plan.

The Bold and the Beautiful spoilers say Justin (Aaron D. Spears) will start to sweat over his boss’ scheme. He knows how impulsive Bill can be! Justin will warn Bill not to do anything crazy as Thorne (Ingo Rademacher) and Katie prepare to wed. They’ll decide to make it official now so they can look like a stable couple in court.

Next, their loved ones will gather for a rushed wedding. Katie and Thorne will beam as they say “I do.” Soon after, the custody battle will take center stage. Bill will realize he could really use Liam (Scott Clifton) on his side, so he’ll try to guilt-trip him into turning against Katie.

However, Liam could be tough to convince. He’s still dealing with some lingering pain from Bill’s previous misdeeds. It sounds like Bill may have to rely solely on Wyatt (Darin Brooks) and Brooke. They’ll definitely worry about what’ll happen once they testify for Bill in court.

The Bold and the Beautiful spoilers say the proceedings will bring out some ugly details. Bill will be haunted by the plots of the past, so expect some emotional moments. By the time B&B fans hear closing statements, there’ll be loads of tension in that courtroom.

Finally, Hope (Annika Noelle) and Steffy (Jacqueline MacInnes Wood) will face a rare occurrence. They’ll actually agree on something! Perhaps they’ll both think Bill deserves to be a father to Will (Finnegan George). Despite their many issues, Steffy and Hope may vow to always put their kids first. They could make a pact to leave their feud out of anything family-related in the future.

Hope and Steffy will have good intentions, but that doesn’t mean they’ll be able to keep their promises. Anything can happen down the road! For now, The Bold and the Beautiful fans won’t want to miss this week’s shockers. We’ll give you updates as other B&B news comes in. Stick with the CBS soap and don’t forget to check CDL often for the latest Bold and the Beautiful spoilers, updates, and news.