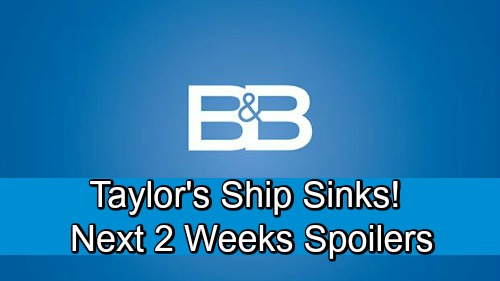 The Bold and the Beautiful (B&B) spoilers for the next two weeks tease that some stunning moments are on the way. During the week of November 26-30, a flood of memories will hit Taylor (Hunter Tylo). She’ll be tormented by the night she shot Bill (Don Diamont), so that’ll stir up some fears again. Taylor will worry that Bill’s going to change his mind and have her locked up.

Steffy (Jacqueline MacInnes Wood) will try to soothe Taylor’s nerves, but it’ll be no use. Taylor will be highly agitated and that’ll lead to another string of bad decisions. The Bold and the Beautiful spoilers say Taylor will have a bone to pick with Hope (Annika Noelle). She’ll harass Liam’s (Scott Clifton) pregnant wife for taking what she feels belonged to Steffy.

B&B fans will see Liam rush to Hope’s defense and chew Taylor out. He’ll also get into a shouting match with Steffy, who’ll argue that Liam’s overreacting. Deep down, Steffy may see some red flags in her mother’s behavior as well. However, she’ll do her best to act like it’s no biggie and get Liam off Taylor’s back.

Alas, that plan won’t work for several reasons. For starters, Liam’s concern will get the best of him. He’ll end up spilling the news of who Bill’s (Don Diamont) shooter was. Hope will be on the receiving end of that revelation, so she’ll possess some risky knowledge soon enough. It’ll come in handy thanks to what comes next.

The Bold and the Beautiful spoilers state that Brooke (Katherine Kelly Lang) and Taylor will have a showdown. B&B viewers know Brooke and Steffy don’t always get along, so that’ll come into play here. Taylor will put the blame solely on Brooke and contend that the intimidation has to stop. She’ll refuse to let Steffy be Brooke’s punching bag.

Brooke will think Taylor’s being ridiculous, but she could be a bit rattled by how disturbed her enemy seems. Later, Taylor will give Liam and Steffy updates on her contentious encounters. They’ll be troubled by Taylor’s many outbursts, but they’ll just monitor the situation and hope for the best.

Elsewhere, Hope will feel like Taylor must be stopped. The Bold and the Beautiful spoilers say she’ll tell Brooke that Taylor tried to kill Bill. During the week of December 3-7, Brooke will reel over the bombshell. She may suggest that they have to keep it quiet, but Hope may not be so sure that’s the right call.

After a debut the week before, Dr. Reese Buckingham (Wayne Brady) may be able to help Taylor out. The Bold and the Beautiful buzz has it he’ll be involved in treating Taylor at some point. Steffy might reach out to the doc if she thinks it’ll help Taylor regain some stability. Reese will also annoy his daughter, Zoe (Kiara Barnes), so stay tuned for some fun drama.

Over with Donna (Jennifer Gareis), she’ll wonder why Pam’s (Alley Mills) so stuck on getting Quinn (Rena Sofer) away from Eric (John McCook). Donna would indeed like to have Eric back, but Pam’s obsession will leave her perplexed. They’ll talk about Pam’s hatred for Quinn and how Eric deserves far better. Pam will be convinced that with some hard work and sneakiness, Donna can win Eric’s heart again.