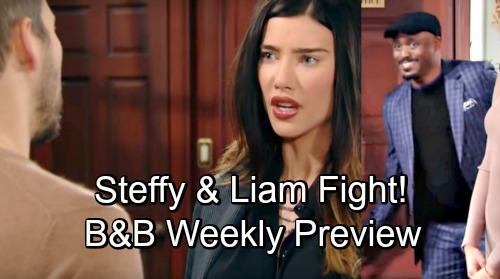 The Bold and the Beautiful (B&B) spoilers for the week of November 26-30 tease that some surprises are coming up. First, Zoe (Kiara Barnes) will get a big one. She’ll be taken aback when her father shows up out of the blue. Wayne Brady will make his debut as Dr. Reese Buckingham, so it should be interesting to see all the trouble he stirs up.

As you might expect, Zoe’s relationship with her dad will be complicated. She won’t exactly be thrilled that Reese has followed her to town. It looks like Dr. Buckingham will be part of Taylor’s (Hunter Tylor) storyline as well. B&B fans know Taylor’s been a bit unhinged lately. She shot Bill (Don Diamont), so she’s clearly not operating on a normal level.

Taylor will work herself into another frenzy in the week ahead. She’ll be worried about Bill (Don Diamont) possibly turning her in after all. Steffy will assure Taylor that this is their secret, but that may not be the case for long. Liam (Scott Clifton) will get involved and could pose a serious threat to Taylor’s future. He’ll be upset as Taylor’s behavior becomes increasingly erratic.

Taylor will blast Hope (Annika Noelle), who’s pregnant with Liam’s second child. He won’t appreciate Taylor putting either one of them at risk. That’ll lead to some conflict between Liam and Taylor as well as Liam and Steffy. The Bold and the Beautiful spoilers say some fierce faceoffs are ahead.

Bill will also be confronted by Taylor during the week of November 26-30. Taylor will really be poking the bear! She should really listen to Steffy and just leave this alone, but she won’t be able to stop herself.

The Bold and the Beautiful spoilers say Taylor will get on Bill’s last nerve, so he’ll offer Steffy a warning. Bill will insist that he’s a changed man, so he has more patience than usual. Nevertheless, Bill can certainly be pushed over the edge. He’ll want Steffy to keep her mother calm and out of his hair or there could be a steep price to pay.

It sounds like some exciting drama’s in the works. We’ll give you updates as other B&B news comes in. Stay tuned to the CBS soap and don’t forget to check CDL often for the latest Bold and the Beautiful spoilers, updates, and news.