The Bold and the Beautiful Spoilers Next 2 Weeks: Comatose Bill Gets Threatening Visit – Quinn’s Startling Confession to Eric

BY Heather Hughes on October 21, 2018 | Comments: one comment
Related : Soap Opera, Spoiler, Television, The Bold and the Beautiful 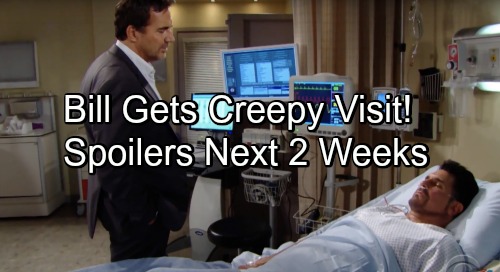 The Bold and the Beautiful (B&B) spoilers for the next two weeks tease that some scary moments will unfold. After Bill’s (Don Diamont) brawl with Ridge (Thorsten Kaye) and Thorne (Ingo Rademacher) ends in disaster, he’ll be hospitalized with life-threatening injuries. Brooke (Katherine Kelly Lang) and Katie (Heather Tom) will rush to the waiting area, where Thorne and Ridge will get grilled.

Liam (Scott Clifton) and Wyatt (Darin Brooks) will also be notified. They’ll fret as they once again face the possibility of losing their father. Bill’s loved ones will take turns sitting by his bedside. Each friend or family member will urge Bill to fight. He can be awfully nasty, but he still has people who care about him.

Back with Thorne and Ridge, they’ll deal with a police interrogation. Detective Sanchez (Jeremy Ray Valdez) will take their statements and try to figure out if charges should be filed. Later, an emotional Katie will worry about Will (Finnegan George). She’ll confront her husband about his part in the showdown and insist that if Bill doesn’t survive, Thorne will have to break the news.

Thorne will creep in Bill’s room when Katie’s not looking. What sneaky B&B plan will take shape? Will Thorne just want to reflect and deliver pointless warnings? Bill will be unconscious, so it’s not like Thorne would achieve much. Still, he might urge Bill to keep his mouth shut about how it all really went down. Part of Thorne may hope that Bill indeed dies. He might even consider finishing him off in there!

Meanwhile, Pam (Alley Mills) will hurl threats at a furious Quinn (Rena Sofer). The Bold and the Beautiful spoilers say their feud will grow increasingly bitter, so be prepared for some vicious verbal attacks. Eric (John McCook) will have a hard time dealing with these out-of-control enemies.

The week of October 29-November 2 will deliver even more Quinn and Pam drama. Since Quinn isn’t thrilled about Pam and Charlie’s (Dick Christie) nuptials, she’ll have to explain why. To be fair, it’s not the wedding that Quinn objects to. It’s the location! Quinn will tell Eric her reasons for voicing her disapproval. She’s apparently got a good excuse for why she doesn’t want the wedding in her home.

Back at the hospital, Bill will remain in dire condition. Brooke will hate seeing Bill in such a terrible state, so she’ll push him to make a full recovery. She may not be with Bill, but she still loves him dearly. Bill will be in a coma, but Brooke will hope he can hear her anyway. She’ll argue that Bill has to hang in there and come back to the people who care about him.