The Bold and the Beautiful Spoilers: Week of October 22-26 – Heated Showdowns, Life or Death Coma, and Wedding Battle 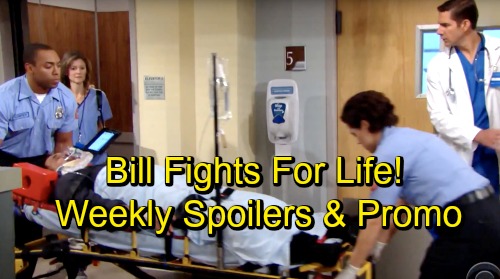 The Bold and the Beautiful (B&B) spoilers for the week of October 22-26 tease that we’ll see some warm moments as well as some heated ones. First, Liam (Scott Clifton) and Hope (Annika Noelle) will bond over Dr. Phillips’ (Robin Givens) revelation. After learning their baby’s gender, Liam will feel even closer to his wife. Their relationship will be on solid ground as they make plans for their bundle of joy.

Unfortunately, things won’t be as calm across town. Ridge (Thorsten Kaye), Thorne (Ingo Rademacher) and Bill (Don Diamont) will have a violent showdown, so don’t be surprised when it takes a terrible turn. The Bold and the Beautiful spoilers say Bill will tumble off the balcony and land in the hospital. He’ll end up in a coma, so Thorne and Ridge will be interrogated about their involvement.

Detective Sanchez (Jeremy Ray Valdez) will grill the Forrester brothers and try to nail down exactly how this happened. He’ll want to get the truth and seek justice. Meanwhile, Liam (Scott Clifton) will receive some horrifying updates. He’ll be distraught when he learns Bill’s once again fighting for his life in a hospital bed.

Liam will pay his dad a visit and speak to his unconscious body. He’ll undoubtedly urge Bill to hang in there and come back to the people who love him. Liam, Wyatt (Darin Brooks) and Will (Finnegan George) need their father, so Bill has a good reason to stick around.

Over with Katie (Heather Tom), she’ll be upset about Thorne’s role in all this. B&B fans can expect Katie to ask a tough question. She’ll wonder what Thorne’s going to tell Will if Bill doesn’t make it. That’ll lead Thorne to Bill’s bedside, but will it be for a remorseful speech or deadly action? Regardless, The Bold and the Beautiful spoilers say some gripping scenes are ahead.

Elsewhere, Quinn (Rena Sofer) and Pam (Alley Mills) will get into an argument. It won’t take long for their feud to reach another level. Quinn will throw Pam’s history of instability in her face, which is like the pot calling the kettle black. We all know Quinn’s got a twisted, unhinged and violent history of her own.

Pam may point that out, but she’ll also offer an unsettling warning. She’ll insist that Quinn if dares to ruin her wedding to Charlie (Dick Christie), she won’t like the outcome. The Bold and the Beautiful spoilers say Eric (John McCook) will ultimately intervene, but he’ll have to do some reflecting. He’ll need to figure out which side he’s really on and find a way to handle the crisis.

Some great scenes are coming up on the CBS soap. We’ll keep you posted as other news emerges. Stay tuned to B&B and don’t forget to check CDL often for the latest Bold and the Beautiful spoilers, updates and news.