The Bold and the Beautiful Spoilers: Sneaky Quinn Up to Her Old Tricks – Sabotages Wyatt and Sally’s New Romance 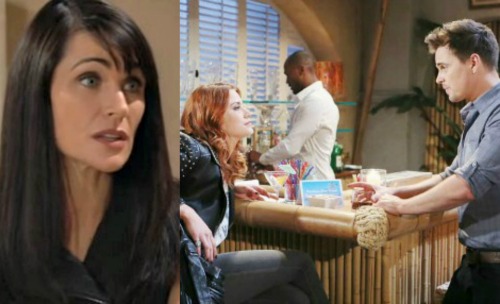 The Bold and the Beautiful (B&B) spoilers tease that Sally (Courtney Hope) will find herself another knight in shining armor. She fell for Liam (Scott Clifton) at one point, but that was a lost cause. Sally couldn’t compete with his love for Steffy or even Hope (Annika Noelle).

Of course, Thomas (Pierson Fode) also let Sally down. He fell for Bill’s (Don Diamont) lies and reunited with Caroline (Linsey Godfrey), which left Sally devastated. Alas, it looks like Thomas has broken Sally’s heart once again. She’ll definitely have a chip on her shoulder as she throws back drinks this Friday. Sally will wonder if there are truly any decent men in the world.

Luckily, there’s still a great one waiting to scoop Sally up. Wyatt (Darin Brooks) and Katie (Heather Tom) just split, so Sally’s timing is perfect. She may have some reservations about getting involved with someone on the rebound, but she won’t be able to deny the spark.

There’ll be some big differences between Sally’s previous white knights and Wyatt. Unlike Liam and Thomas, Wyatt may focus on emotional support. This will be less about saving Sally’s career and more about mending her shattered heart.

Plus, Wyatt’s the kind of guy who tends to fully commit. He’s not as much of a waffler as Liam. Based on the way things have played out with Thomas, it sounds like he’s a waffler, too. Sally needs somebody who only has eyes for her and that could be Wyatt soon enough.

However, any B&B romance is going to face some roadblocks. Sally and Wyatt’s main hurdle may not come in the form of another love interest. Perhaps The Bold and the Beautiful will turn to a familiar obstacle for Wyatt. Naturally, we’re talking about his meddling mother.

Quinn (Rena Sofer) is notorious for messing up Wyatt’s love life. No matter who he chooses, Quinn just can’t seem to stay out of it. You’d think she’d be happy that he was parting ways with Katie and choosing someone less complicated. Unfortunately, no one is ever good enough for Quinn’s baby boy!

It’s easy to imagine Quinn and Sally clashing over this relationship. They both have strong personalities, so there could be some serious tension. Will Quinn resort to sabotage? The Bold and the Beautiful spoilers say Quinn will indeed be up to her old tricks this summer, so Wyatt and Sally could be her next victims.

Are you ready to see Quinn stir up some trouble and add to the drama? We’ll give you updates as other B&B news comes in. Stay tuned to the CBS soap and don’t forget to check CDL often for the latest Bold and the Beautiful spoilers, updates, and news.