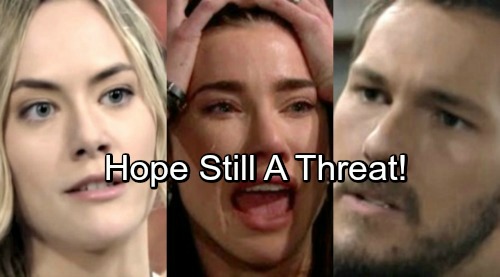 The Bold and the Beautiful (B&B) spoilers tease that Steffy (Jacqueline MacInnes Wood) will be thrilled when Liam (Scott Clifton) pops the question. He’ll ask Steffy to marry him again and she’ll happily accept. However, a little doubt will creep in right before or after she agrees. Steffy will decide she needs brutal honesty from Liam, so she’ll push him to admit how he truly feels.

Liam will listen as Steffy talks about her deep devotion. He’s got her whole heart, so she’ll want to know where his heart stands as well. Steffy knows Liam loves her, but some fears about Hope (Annika Noelle) will linger in the back of her mind.

Liam was ready to marry Hope not too long ago, so Steffy will worry that he could drift toward her once more. She’ll feel like she needs some reassurance before she goes through with another wedding.. Steffy appreciates the fact that Liam wants to build a future with his family, but she also wants to be his one true love. Can Liam really put Hope in the rearview mirror?

Steffy doesn’t want to get her hopes up only to have them smashed again. If Liam has any reservations about leaving Hope behind, he needs to speak up now. The Bold and the Beautiful spoilers say Liam will make a heartfelt promise to Steffy. He’ll insist that he’s all in on their fresh start. Liam will always care about Hope, but he’ll feel confident that he’s with the woman he’s meant to be with.

Once Liam makes his sweet speech, Steffy will be satisfied. She’ll feel like she can relax and just enjoy this engagement. The Bold and the Beautiful spoilers say they’ll plan their nuptials in the near future. Steffy and Liam won’t want to wait on their new beginning. They’ll move forward in total bliss, but Steffy’s hunch about Hope may have been right. How long until Liam’s inching back toward her?

B&B fans can expect Wyatt (Darin Brooks) to hit things off with Sally (Courtney Hope) soon, so the show may be keeping Hope single for a reason. This love triangle will probably never be over for good! There’s just too much history on both sides. Liam tends to bail on a romance at the first sign of trouble and we know Bill’s (Don Diamont) bound to cause more of it.

Will Steffy’s fears come true? Will she have to watch Liam crush her dreams and build a new life with Hope? We’ll give you updates as other B&B news comes in. Stay tuned to the CBS soap and don’t forget to check CDL often for the latest Bold and the Beautiful spoilers, updates, and news.