The Bold and the Beautiful Spoilers: Scott Clifton Reveals Devastating Drama for Liam and Steffy – Hints at Hope for ‘Lope’ 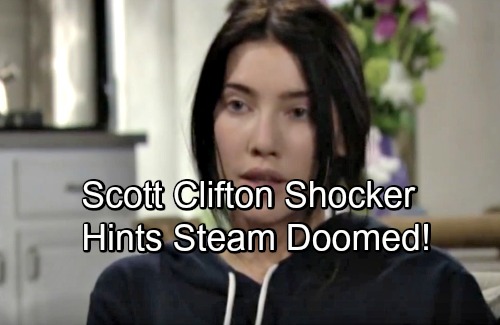 The Bold and the Beautiful (B&B) spoilers tease that Steffy (Jacqueline MacInnes Wood), Liam (Scott Clifton) and Kelly will begin building a happy home together. Now that Liam has parted ways with Hope (Annika Noelle), he’s committed to his family’s future. Steffy is ecstatic to have Liam back by her side. She feels certain he’s going to be a great husband and father in the years to come.

After Liam proposes to Steffy, they’ll start talking about the next step. They’ll have wedding plans on their minds, so they’ll become even more confident in their reunion. Steffy and Liam won’t think anything can break their strong bond, but they’ll soon face shocking complications. The Bold and the Beautiful spoilers say a few B&B bombs will drop!

In an interview with Soap Opera Digest, Scott Clifton admitted that the road ahead wouldn’t be easy. Like most soap fans, Clifton understands that a couple’s bliss can be sign of impending doom! He provided some big hints about where “Steam’s” storyline is going.

Now that Steffy and Liam’s dreams are coming true, it’s time to brace for trouble. Clifton reminded Bold and the Beautiful viewers that “it ain’t over till it’s over.” There’s a good chance Liam will do what he does best and waffle again.

Will something happen that sends Liam back toward Hope? “Once you think you know what’s going to happen, that’s when you need to be cautious,” Clifton said. “The fact that all evidence is pointing toward Steffy should make you, the viewer, very skeptical as to where he and Steffy will actually end up.”

That’s a pretty blatant clue right there! It makes sense that B&B would want to explore Liam and Hope’s relationship a bit more. Why bother recasting Hope if you’re not going to give “Lope” a real shot? This breakup has been just a little too clean and simple, so more drama has to be looming.

Hope could reveal that she’s pregnant, which might change things for Liam. Kelly paternity test tampering is another option. Bill (Don Diamont) surely has some tricks up his sleeve! Could he be Kelly’s biological father or at least make it seem like it?

The Bold and the Beautiful spoilers say a blackmail plot will shake things up, too. There are so many ways for Liam and Steffy to be ripped apart, so don’t expect them to live happily ever after. We’ll give you updates as other B&B news comes in. Stay tuned to the CBS soap and don’t forget to check CDL often for the latest Bold and the Beautiful spoilers, updates, and news.