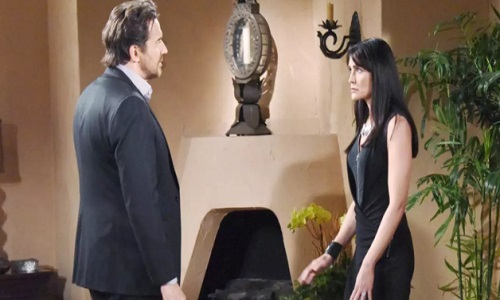 The Bold and the Beautiful spoilers tease that Ridge (Thorsten Kaye) will continue to get a chilly reception from Brooke (Katherine Kelly Lang) over his decision to put Hope For The Future (HFTF) on the back burner at Forrester. Brooke is certain that Ridge made his decision out of favoritism for Steffy (Jacqueline MacInnes Wood) and to punish Hope (Annika Noelle) for her “win” in getting Liam (Scott Clifton).

Ridge really went against what a lot of people at Forrester wanted in making his decision for Steffy’s Intimates Line. It’s not just Brooke who’s upset. Hope’s devastated and will probably be chilly herself toward Ridge for a while. Thorne (Ingo Rademacher) also was gunning for HFTF to win out, so he’s disappointed in Ridge, too.

But there’s one person (aside from Steffy) who’s going to throw her support around Ridge, and that’s Quinn (Rena Sofer). Quinn really didn’t have a stake in the fight between Intimates and HFTF, and she would have been happy to pair her jewelry with either line. But now that the decision’s been made, she’s genuinely happy for Steffy and The Intimates Line.

Of course, Quinn also has a soft spot for Ridge. She and Ridge got themselves into trouble a while back with their mutual attraction and inability to refrain from kissing. She’ll probably want to support Ridge quietly and from afar, to avoid the appearance that there’s anything untoward going on.

Still, Quinn’s support for Ridge may unnerve Brooke. Brooke probably hasn’t thought about Ridge’s “episodes” with Quinn for a while now, but once Quinn starts openly supporting him at Forrester, the red flags may go up. Of course, Brooke won’t have much room to talk, since she’s secretly been meeting with Bill (Don Diamont) and venting to him about Ridge’s actions.

Maybe Ridge will enjoy having a little support from Quinn. As he and Brooke inevitably grow farther apart due to his picking Steffy’s line over Hope’s, he and Quinn might grow closer. Could the attraction between Quinn and Ridge be rekindled?

Do you think Quinn and Ridge may be drawn back together? Stay tuned to the CBS soap and don’t forget to check CDL often for the latest Bold and the Beautiful spoilers, updates, and news.