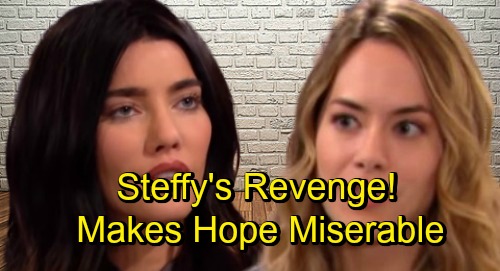 The Bold and the Beautiful (B&B) spoilers tease that Steffy’s (Jacqueline MacInnes Wood) quest for Forrester domination will continue. Hope (Annika Noelle) may have won the battle for Liam’s (Scott Clifton) heart, but that wasn’t exactly a true victory. After all, Steffy was the one who threw in the towel and urged “Lope” to be together.

Nevertheless, Hope got the prize just the same. Steffy seems to think that should be enough for her rival. She wants Hope to be the happy homemaker while she focuses on her thriving career. Of course, we can’t forget that Hope had a baby scare not too long ago. She’s supposed to be taking it easy and avoiding stress. Instead, Hope’s pushing herself too hard and fighting Steffy every step of the way.

The Bold and the Beautiful spoilers say that trend won’t die down anytime soon. Steffy’s reached a point where she just doesn’t care if Hope gets angry. Deep down, she may even like it. Steffy’s sticking it to her rival whether she means to or not, so she might as well have some fun in the process. Perhaps Steffy gets a thrill out of watching Hope lash out and reel over the losses she’s facing.

Regardless, those losses will keep coming. B&B fans can watch Hope hit the roof when she learns Steffy has poached Sally (Courtney Hope). It’ll be Hope’s turn for pettiness then. She never paid any attention to Sally and her talent, but she’ll suddenly be livid once Sally’s working on the intimates line.

Both Steffy and Sally will think Hope should just deal with it. They’ll move forward with big plans while Hope’s left to seethe. Now that Hope for the Future’s being downsized, it’s not like Hope needs Sally anyway. She’ll just be mad because Steffy was able to snatch Sally up instead.

Of course, that’s part of the reason Steffy’s bringing Sally on board. It appears there are vengeful desires on both sides. This Bold and the Beautiful storyline’s been filled with rage, jealousy and showdowns. You can bet there’ll be even more in the coming weeks!

Whose side are you on? Are you glad Steffy’s making Hope’s life miserable? Do you think Hope should fight back and somehow make Steffy pay? We’ll give you updates as other B&B news comes in. Stay tuned to the CBS soap and don’t forget to check CDL often for the latest Bold and the Beautiful spoilers, updates, and news.